I don’t know if I need to turn in my Asshole card for saying this but I’m not into Japanese animation. To be fair, I don’t know much about it. All I know is that Howl’s Moving Castle didn’t do it for me and neither did Ponyo, even though I know they should. Part of the problem, as Jay pointed out, is the rock and hard place in which we’re caught between reading subtitles or enduring bad dubbing. Recently though, I was on a date with someone who said that I absolutely had to see Spirited Away and next time- in the event of an uncomfortable silence- it would be 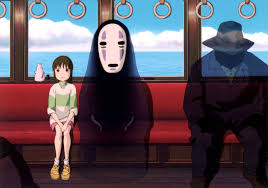 nice to have “So, I finally saw Spiritied Away…” in my back pocket.

I was a little discouraged to discover (shows how little I know about the wonderful world of Japanese animation) that both of the above-mentioned films I had so little interest in were from the same master of the medium (Hayao Miyazaki) as Spirited Away. Not a great sign that this was going to be the movie that finally turned me on to anime.

Even though most who have seen it tend to regard it as a modern masterpiece, I was still 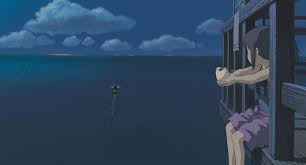 surprised how much I enjoyed it. I chose to watch the dubbed version, which being supervised by Pixar’s John Lasseter wasn’t nearly as distracting as usual. I made the right choice, partly because the English-language script was specifically written to match the lip movements on screen and was supported by well-cast voice actors. Mostly though, the images are often so bizarre, so imaginative, so exquisite that I would have hated focusing my attention to just the bottom of the screen even more than I susually would.

The plot centers around a bathhouse where dirty spirits can come to relax and the cast of characters include talking forgs, giant babies, stink spirits, and dragons. What drives it though is one human child’s journey into the unkown as she confronts her many fears to save her parents who are stuck in the spirit world. It’s like Finding Nemo in reverse set in a brothel.

Oh yeah, the brothel. Apparently Miyazaki saw Spirited Away as his commentary on prostitution in Japan. Even at a glance, the parallels are hard to miss but, after reading up on it, the metaphor is even clearer. I’m still not as enthusiastic as I am about movies like Wall-E or Up but it’s nice to see an anime film for once where I can understand what all the fuss is about.

11 thoughts on “Spirited Away”