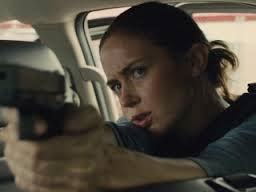 I discovered two things immediately prior to the North American premiere of Sicario, the latest from the always interesting Denis Villeneuve. One, I had been mispronouncing the film’s title this whole time  (there’s a hard “c” apparently). And two, I was not even close to dressed properly. I shivered for forty-five minutes in line as it poured on me.  TIFF- as well as being the unofficial start of awards season – may be the unofficial end of summer.

The dreary weather suits a screening of any Villeneuve film just fine and Sicario is no exception. We walked by a TV reporter that morning who was declaring this to be the most gruesome thing you’re likely to see at the festival. During the question period after last night’s screening, the director attempted to explain to an audience member why he was so fascinated with such dark themes. “Well, I’m a spoiled Quebecer whose biggest problem is winter,” he joked.

I had high hopes for Sicario, being a fan of some of his most recent work (Incendies and Prisoners). His films tend to be dark, even to a jaded Asshole like myself, with deliberate pacing and an excellent tone  He demonstrates these qualities here but didn’t quite manage to get under my skin in the same way, despite an impressively unnerving score.

Sicario is an action movie of sorts (Villeneuve joked in his introduction that he’d always dreamt of making one) about the war on drugs across the US-Mexico border, raising the usual questions about how far is too far when battling evildoers. The shootouts – as well as the sometimes unbearable suspense that lead up to them – are shot and edited expertly. Benicio Del Toro and Josh Brolin, both present to answer our questions last night, play elusive characters whose motives we’re never sure of and are always interesting to watch. Emily Blunt, as the idealistic FBI agent who believes strongly in the rule of law, plays against type with mixed results. Blunt even feigned taking offense to one audience members question to Villeneuve about why he decided to cast her.

Sicario is a tight and brutal film and I was thrilled to be at the North American premiere, even if it meant standing out in the rain. I don’t think it works as well as Incendies or Prisoners though, mostly because the questions it raises on the subject of right or wrong in the war on drugs aren’t quite new enough, even among Benicio Del Toro movies.