Little Linda Blair, tiny star of The Exorcist, didn’t roll up to the set in her mom’s station wagon, fresh from a spelling test and a bologna sandwich, looking all demonically possessed. Someone had to paint her that way. Doing makeup special effects is someone’s job.

Meet Ashley Robinson, an emerging Canadian freelance SFX artist and a filmmaker in her own right. You might expect that someone who creates stab wounds all day would be a little bit twisted – and you’d be right. Matt and I had the chance recently to not only sit down with Ashley but to undergo “the process” and it turns out that not only is Ms. Robinson incredibly interesting, self-taught, and artistic, she’s funny as hell too.

Jay: So how did you get into this line of work?

Ashley: I started by working with my brother (Andrew JD Robinson, founder of WORKOBEY Films). I’ve been his go-to makeup effects consultant for whatever project he is working on for some time now. It’s only recently I have decided to dabble more into the gore FX and showcase my creations on social media. [You can find her on Instagram @ash_fx] At the moment I’m working exclusively for his production as well as whatever project I have up my sleeve, but am open to expanding in the future if the timing is good and the right project comes along.

Jay: What kind of work is available for you in Ottawa?

Ashley: Indie films, Halloween events, building a photographer’s portfolio, etc. are all different opportunities for an FX artist. Ventures like that can exist anywhere; you just might have to dig a little deeper in some areas.

Jay: Were you a creepy kid? What I mean is – did you make your dolls look like monsters? Give your friends gruesome makeovers? Look at books of accident photos?

Ashley: If filming a feature-length called “Slaughterhouse” with my Barbie dolls (blood pumps and all) is considered strange…then yes.

I think there is something beautiful about transforming someone once attractive into what we view as repulsive or ugly. It requires a type of vulnerability to welcome others’ disgust.

Jay: What kind of reference materials do you use for inspiration?

Ashley: Depending on the type of wound that I am interested in creating, I will research real images. This can be really gut-wrenching. Nothing beats the real thing though. Accuracy is the force behind a positive (aka disgusted) reaction.

Jay: Obviously there’s some artistry involved in the process as well. We know you write and direct films. Do you do other kinds of art ?

Ashley: I was definitely that quiet, weird, artistic girl in high school that doodled on every binder. Drawing, painting and writing have always been things I enjoyed. So I guess naturally the next step was disfigurement?

Jay: What are some of your favorite makeup effects that you’ve created?

Ashley: One of my first attempts would have to be a favourite. It was cuts across the fingers using my homemade molding wax (which can be a pain to make yourself). I was proud I was able to blend it the way I did and thought it came out well for my first time.

Jay: Do you go all out for Halloween or is that too much like work for you?

Ashley: My go-to costume as a kid was always a witch- every single year. Surprisingly I haven’t gone all out for Halloween since then. But why mess with a classic?

Jay: What movie do you wish you could have worked on?

Ashley: I would have loved to been a part of ‘Excision’- in any way shape or form. The visual dream sequences, the blood…oh the blood. I just wish I had beaten them to it!

Jay: Were you a fan of horror first, or did that interest come as you started with the FX?

Ashley: I have lived and breathed horror since I was about 10 years old. My brother and I would somehow get away with renting stacks of VHS horror movies from a local video store down the street. Watching horror movies literally consumed the majority of my life growing up and still does to this day.

Jay: What actors or directors would you most like to work with?

Ashley: Eli Roth and Quentin Tarantino. They can make anyone look fucking cool.

Jay: In such a CGI-heavy time in the movie industry, do makeup effects still have a place?

Ashley: When you look back at the 70’s and 80’s makeup FX, it is mesmerizing how artists, with their own hands and pure talent could create something so amazing. I believe they will always have a place in a true horror fan’s heart, but industry wise, I’m not so sure anymore. It’s a rat race to make the quickest dollar as opposed to creating as a fan for the fans. Animatronics are the shit. Stop Motion is the shit. CGI is just crap.

Jay: Does what you do ever affect you emotionally? Do you get nightmares?

Ashley: Gore FX is oddly therapeutic to me. If I’m having a stressful day at my full-time job for instance, I get excited with the thought of coming home and putting boils on my face…It’s like any hobby, it’s a great and fun distraction. 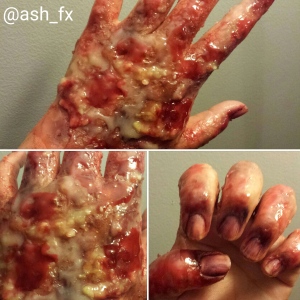 Jay: What about this work do you think would surprise most audiences?

Ashley: Constantly coming up with new and innovative ways to throw your own spin on standard wounds can be challenging. In the end, a cut is a cut…but it’s a matter of how can I make this one stand out from the hundreds of others?

Jay: Is there any movie character or effect that you would have done differently?

Ashley: Twilight. I think that says it all.

If you think Ashley’s work is pretty clever, wait till you see what she does with our FACES.

Matt and Jay get treated to makeup FX by Ashley Robinson.

What does it feel like? Matt describes the processing as both relaxing and numbing.

Every time she sticks a popsicle stick into his “wound”, I cringe. I remember that the blood she’s applying is fake but keep forgetting that his wounds are too. They’re so convincing they’re confusing my poor brain! 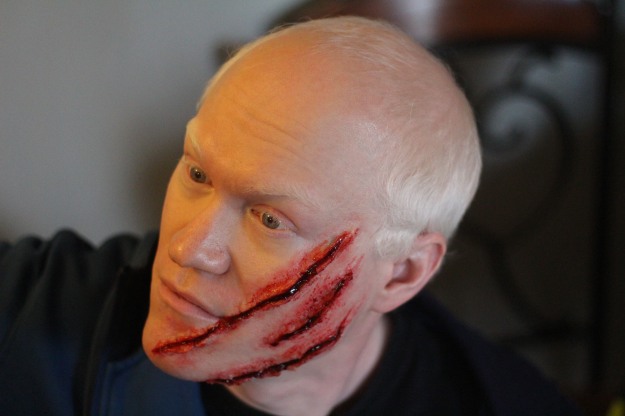 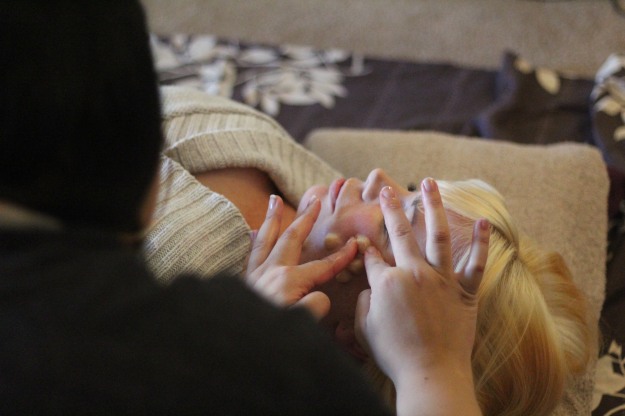 My turn! Ashley uses special wax to get the shapes she wants. It’s a very one-layer-at-a-time process that really doesn’t feel bad at all. Gentler than a facial! 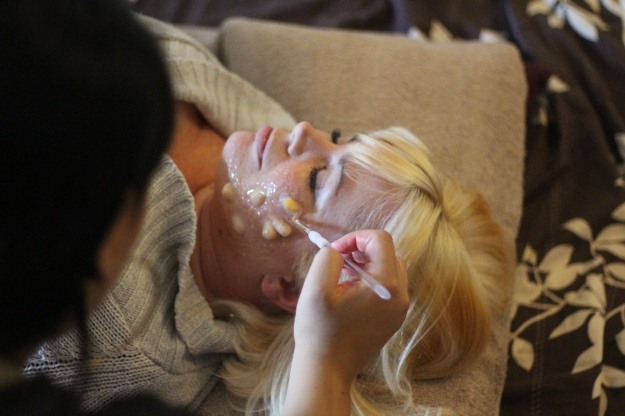 It also doesn’t feel as goopy or as heavy as you’d think. Or as I would have guessed, anyway. Please ignore my gross sweater. It was an expendable piece of clothing that would protect my dress.

Then she paints her creations. 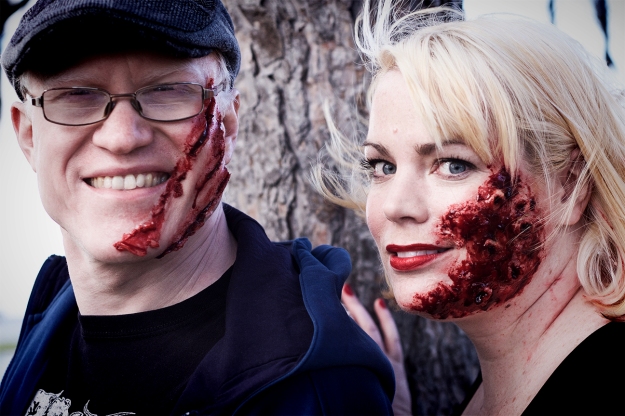 Finished product: what do you think? Pretty gruesome?

Not sure why we’re smiling. Clearly someone should be dialing 911 as they flee in terror.

I find it remarkable and\or alarming that these things really look like they’re part of my face.

My friend Justin says he wants to pop them! 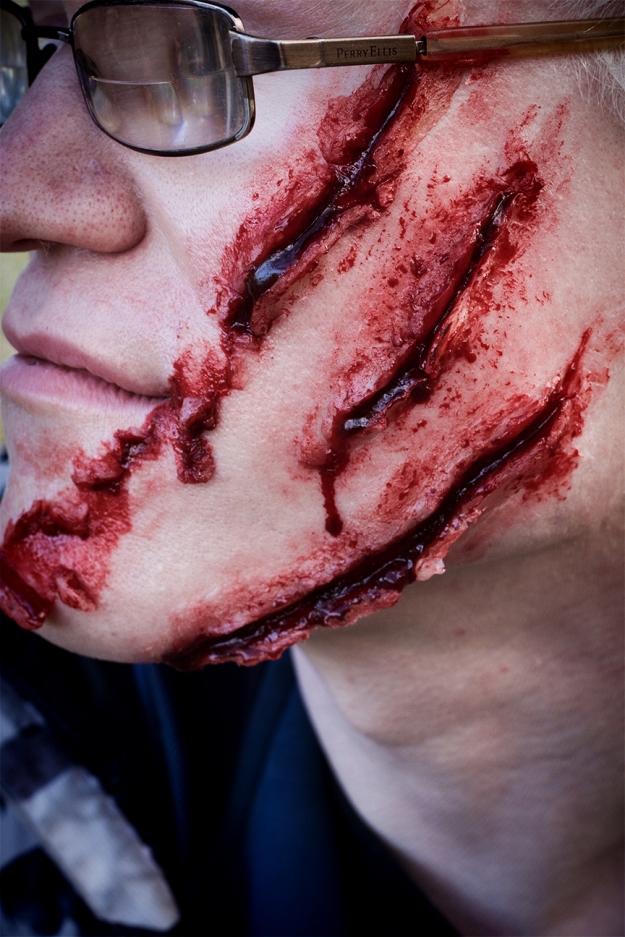 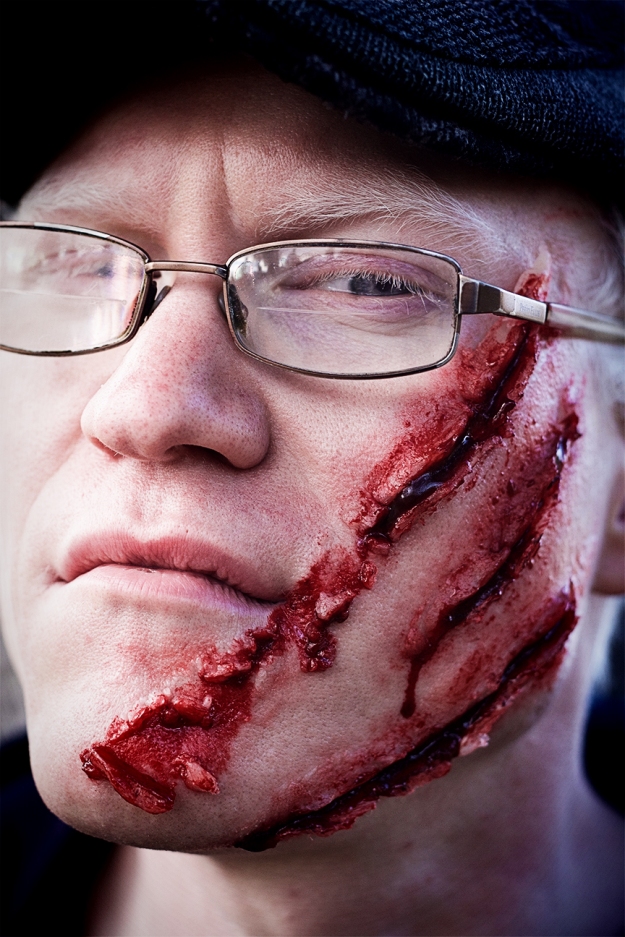 Jay: she may be dying of some sort of radiation, but her lipstick’s still popping. 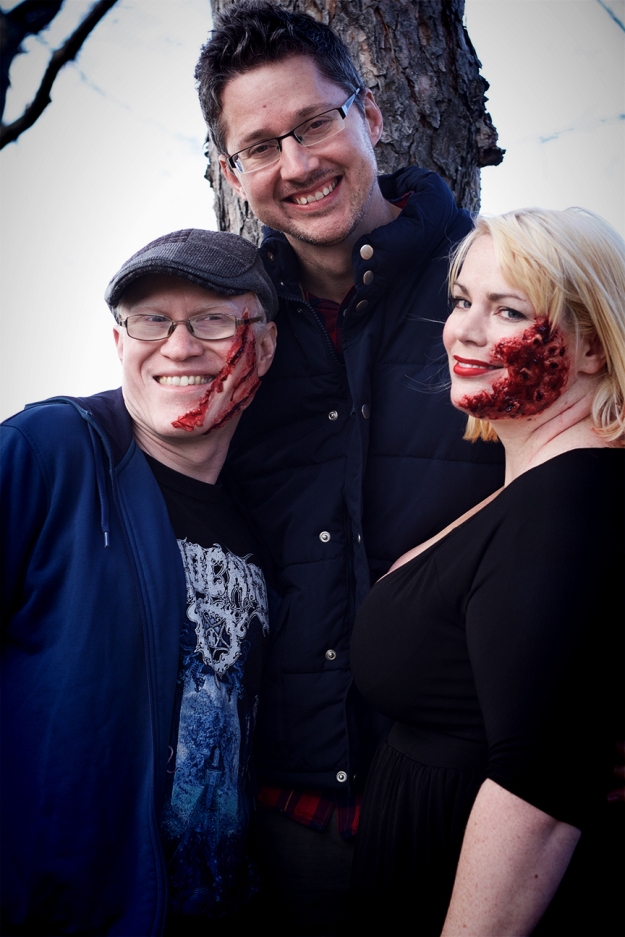