I thought the screenplay for Trumbo was witty and full of verve, but it’s got to be hard to write about one of the most talented

screenwriters out there because the comparisons are inevitable and I must admit that Dalton Trumbo would have produced something tighter, and more energetic – something more like the man himself.

Dalton Trumbo was a successful screenwriter in Hollywood in the 1940s who also had some lofty ideals for bettering his beloved country that led him to join the Communist Party. But as we approached the 1950s, and the cold war between the Soviets and the USA deepened, people confused criticism for treachery. Trumbo and a bunch of people besides were brought up before Congress to account for their ‘unAmerican activities’ and even though Americans supposedly believed in free speech and democracy, they were sent to jail if they refused to rat on their friends.

Hollywood crumbled under pressure and refused to work with known (or suspected) “Commies”, and suddenly these people no

longer had means to support their families. But Dalton Trumbo fought back: he undermined the black list by writing around it, submitted manuscripts under pen names, and continued to employ a lot of unemployable men.

Bryan Cranston plays Trumbo. No, Bryan Cranston IS Trumbo. His performance is so solid it never flags, even when the script slips down some dubious roads. Diane Lane and Elle Fanning play his wife and daughter and add a needed dimensionality to the character and his motivations, though I still feel that maybe we needed to spend more time with this interesting man’s inner life. Director Jay Roach seem 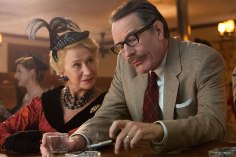 ed to keep things a little superficial, over-relying on his leading man’s ability to keep the motor running. Actually, the entirety of the supporting cast are lending enormous talent: Michael Stuhlbarg, John Goodman, Alan Tudyk, Louis CK, and let me not forget Helen Mirren who does a fabulous turn as a witch-hunting bitch. You can see how much fun she’s having playing such a rotten person.

I think the film is highly enjoyable, and Cranston will never be outTrumboed. That said, I think Roach left the door open for a better film to be made on the subject matter, because I found it very light on the politics, very light on the ethics, and really more of a mischievous caper as Trumbo fights to get a workaround for his career. And maybe that’s because this movie is such a departure for Roach, who has never directed outside the comedy genre before, and is best known for the Austin Powers and Meet the Parents franchises: not exactly heady, probing stuff.

Still, I recommend this without reservations. It’s interesting and eminently well-acted, and Cranston is just a tonne of fun to watch.