It might help you to know that the vaguely-titled production design category used to be called Art Direction, and it’s an award shared among the art director and set decorators. They’re responsible for the visual feel of the film, from designing sets to the style and look of the movie. They read the script and talk to the director to come up with a visual style – what is needed, but also what’s envisioned, what’s possible, and what’s affordable.

The production designer will research art history, politics, and historical information to get ideas. They might provide scale drawings and models of the sets they want to create for the studio to look at. They’re also sourcing studio locations to shoot on, or on-location sites that might be appropriate. They’re in charge of overseeing the construction of whatever needs to be built, and hiring and managing the whole art department to get this stuff done, down to the smallest prop on set. Knowledge of interior design, architecture, and fine art are all necessary. They either make a movie look believably real, or fantastically enchanted, or somewhere in between. Last year art director Adam Stockhausen and set decorator Anna Pinnock won for The Grand Budapest Hotel, a great illustration of every last detail mattering, everything coming together to immerse the audience in this particular world, a hotel in which Matt would readily stay any day of the week.

This year Stockhausen is nominated again along with set decorators Rena DeAngelo and Bernhard Henrich for Bridge of Spies; Michael Standish and Eve Stewart for The Danish Girl; Colin Gibson and Lisa Thompson for Mad Max: Fury Road; Celia Bobak and Arthur Max for The Martian and Jack Fisk and Hamish Purdy for The Revenant.

For Bridge of Spies, production design had to not only faithful recreate 1960s Americana, but also to reproduce same-era Berlin in the throes of the cold war. Stockhausen has to find New York locations that could

double as the courtrooms of that era, then go through the unenviable process of getting permits, and then make sure those locations would actually allow for the “geometry” of the shot – can the cameras move around, can Tom Hanks look out a window and see the Statue of Liberty, can roads be closed down for shooting, will the building allow aesthetic changes to make sure it looks period-appropriate. Then he had to go to Germany and do it all over again (and then to Poland when Germany couldn’t quite do it). And while some locations can be physically manipulated to fit the bill, others will have to be enhanced with visual effects. A whole block had to be realistically

recreated so a character could ride their bike through town. Then they have to make sure that the film crew is arriving at the right time of year if locations are weather-specific (like foliage being in season, or snow-covered streets) and have a back-up schedule in case mother nature doesn’t cooperate, or a rain machine if she’s really temperamental. Some locations, like the Supreme Court, mean only shooting at night when it’s closed, so set decorators rush in last minute to convert the space and use colour to make them stick out in the minds of the audience – a warm palette for New York, and cooler tones for Berlin. 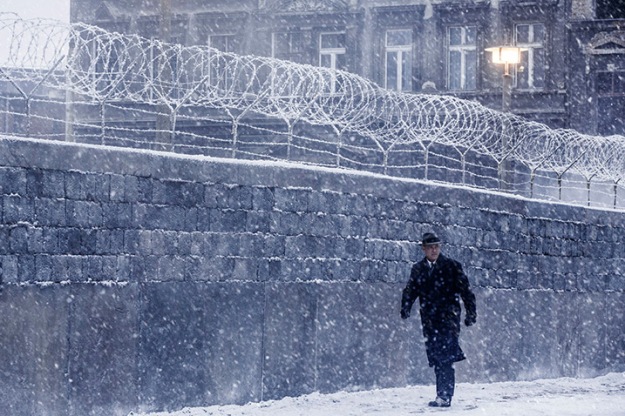 The Danish Girl is visually stunning, as it should be, since both Danish girls in question – the transitioning Lili Elbe and her partner, Gerda – are both artists. Eve Stewart was inspired by Scandinavian artists of the time and used a colour palette of blues and grays for their apartment initially, and

then broadened it once the characters start to blossom, the colour shift signaling to audiences that the characters are shifting too. When they move to Paris, art nouveau is all the rage, and as Lili begins to emerge, we see that more feminine, curvy architecture, and pinks and golds emerge. Stewart has now worked with director Tom Hooper five times, and finds that his films allow her to be “nosy”, to fully investigate characters’ lives. The major coup of this

shoot though, Stewart attributes to not only landing a harbor location on Copenhagen, but “cajoling” historical boat owners to bring their ships down for the filming.  People skills are a must for production design – Stewart also had to get permission to film in museums in Brussels that had never allowed such a thing before. But for the apartments, a tight shooting schedule meant building the sets, and Stewart took to Ebay to find moulding and wood paneling that would cheaply fit the bill. She describes her work as a “treasure hunt” and if you’ve seen The Danish Girl, you know her efforts paid off. 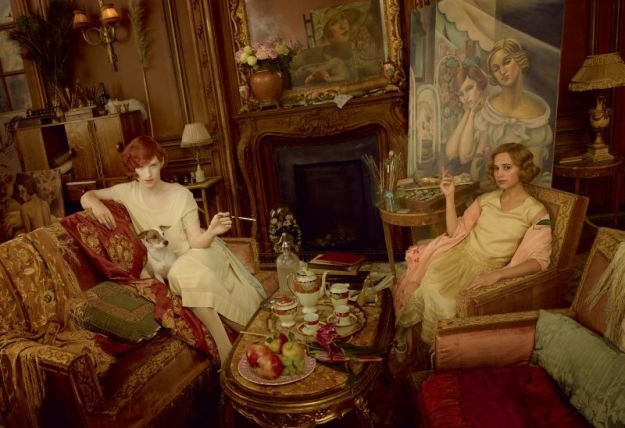 Mad Max: Fury Road is a different animal. When Sean was making his picks for our Oscar pool, he asked if this category would include “all the

cool cars” and when I said yes, he immediately put Mad Max down as his choice to win it all. Colin Gibson definitely set out to show what could be done – not just to dream big, but to really physically make it real. “If we defy gravity we first must show its existence, and then go out of our way to make sure that what we design and build can really do what we imagine it can do.” Out of the amazing fleet of vehicles, Gibson can hardly stand to choose a

favourite among his babies but admits “Probably Joe’s Gigahorse because it was built from the ground up. Everything was basically built by hand; it’s the one that’s dearest to my heart.” But in order to accommodate the actors, Gibson not only had to build this army of badass vehicles, he also had to recreate the cabs and driver’s seats in other locations to make close-up shots more feasible. He also had to constantly contend with safety – these things had to not only look cool, but also drive, and be a safe place for the stunt work to take place.

Gibson’s real herculean task was to find the perfect desert to shoot in. He travelled the most arid locations in the world – the Chilean Atacama, the salt lakes of Bolivia, boggy flats of Tunisia, sandscapes from Jordan to Libya to Dubai – until finally finding “Arid riverbed canyons, huge orange and pink dunescapes, gibber plain and empty open nothingness for 360 degrees, and a mountainous ridge half an hour from town crying out to be our opening shot” in the Namib desert. But keep in mind this isn’t a period piece, and Gibson wasn’t recreating the apocalypse, he was reimagining it.

Back to period pieces, The Revenant’s production design crew got to bring 19th century frontier life to the big screen, but it also had some of the

same challenges of Mad Max in terms of hostile settings. Jack Fisk hiked for months to find the perfect slices of forest or terrain for each shot – and then a back-up one as well in case of flooding or blizzard – systematically covering “every inch of Alberta.” The physical sets were built from the ground up – the fort in its entirety was actually functional, the Indian villages authentic, the campsites thoughtfully laid out – even the canoes were built by hand. Fisk had an additional challenge because director Inarritu and d.p. Emmanuel Lubezki chose to shoot entirely in

natural light, so Fisk had to make sure none of his props casted unwanted shadows or reflected\revealed the camera. Fisk and Purdy worked together to build the infamous mountain of skulls – buffalo skulls to be exact. Buying real ones was difficult and expensive, so they made casts of the 5 they had, made a hundred replicas, and assembled them in a way that could be replicated quickly on set (this scene was shot the same day as Leo and the cliff-horse scene, so it was a 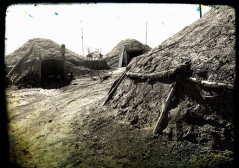 busy one to say the least). Fisk did anthropological research to get the Pawnee village just right – there weren’t any photographs back then so he had to rely on paintings instead. The church ruins were built out of Styrofoam blocks in a warehouse and transported to the location when they found the perfect trees to build around. The blocks were painted with Russian frescoes and a bell was carved out of Styrofoam last-minute on Inarritu’s whim. The work of a production designer is never done! 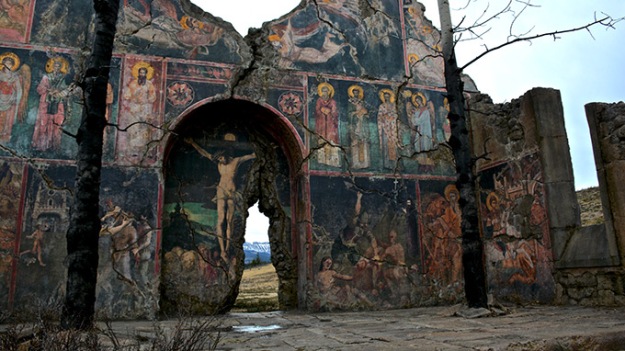 Arthur Max has worked exclusively with David Fincher and Ridley Scott – mostly Scott – both of whom he met while they were all working on commercials. He’s run the gamut between more intimate dramas like G.I. Jane and more sweeping historical stuff like Gladiator. He thinks of his job in terms of “How do you tell a story in 30 seconds?” Max’s story in The Martian started at NASA, where he quickly learned that

black\silver and gold\orange were a MUST in terms of colour palette simply because the tape that real astronauts use all the time (called Kapton, resistant to gamma rays and solar radiation) is amber, plain and simple. The Johnson Space Centre was very open with its latest designs (as long as Max signed a non-disclosure agreement to keep it under his hat until the movie came out) but of course Max took the science and then 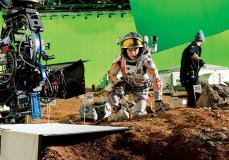 made it look cool (NASA is not known for its aesthetic sense). Anything bearing the NASA logo had to be approved by then, and had to be based on existing technology, the movie being “near-future”, not futuristic. Max’s biggest challenge was that gravity wheel. The actors are literally seen going down it and it couldn’t be faked – or not entirely! They built these sets on a sound stage in Budapest, the biggest in

the world, just barely big enough to fit all of Mars, and for Matt Damon to get into his rover and drive it around. But for most of “Mars”, Damon and crew went to Wadi Rum (also known as the Valley of the Moon) in southern Jordan. Leave it to Max to find a little bit of Mars right here on Earth.

Who’s got your vote?

The Oscars are handed out this Sunday – be sure to follow us on Twitter where we’ll be live-tweeting from our Oscar party. And check out other pieces in our series – costumes, hair & make-up, documentaries.

15 thoughts on “Oscar Spotlight: What the Hell is Production Design Anyway?”