If it walks like a Woody Allen movie and quacks like a Woody Allen movie, then why the hell is Peter Bogdanovich credited as the director? This movie genuinely felt like an Allen ripoff – the pacing, the dialogue, the screwball neuroses, the setting, hell, even the casting – I could never shake the feeling that someone was pulling a fast one on me.

A Broadway director (Owen Wilson) spends a night with a call-girl (Imogen Poots), and 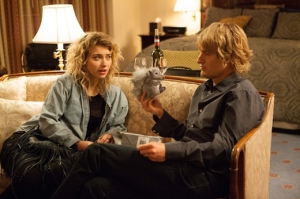 tips her $30K to quit whoring and change her life. He doesn’t expect her to wind up at auditions for his play the next day, but there she is, which makes things awkward because a) his wife (Kathryn Hahn) is the star and b) her co-star and secret admirer (Rhys Ifans) knows the director’s dirty secret and c) the oblivious playwright (Will Forte) is falling a bit in love with her, despite already being in a relationship with the former call-girl’s therapist (Jennifer Aniston). Got all that?

There are roughly a hundred more connections and complications I’m leaving out, simply because I’ll use up my bracket allowance way too quickly, but there are recognizable names even filling the minor roles in this thing. The script and the laughs are hit and miss, and the whole thing actually feels a bit anachronistic. In fact, the movie may have been in production for 20 years or more – Bogdanovich and his wife were still married when they wrote it, and they pictured John Ritter, Tatum O’Neal and Cybill Shepherd in the lead roles (two of those actually do appear in the film) (Oh shit I just used more brackets. Damn it, Jay!). 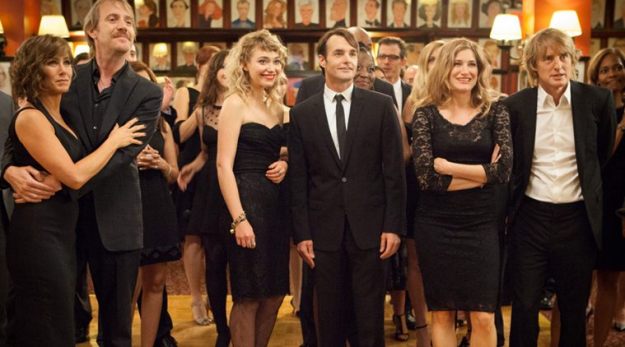 She’s Funny That Way is sporting a painful 39% on the old tomatometer (for context: Batman V. Superman is boasting a 29%) but the truth is, this movie did something for me. It may have been – and this surprises me as much as anyone – mostly thanks to Jennifer Aniston. She plays the world’s worst, most indiscreet, self-involved therapist, and since that happens to be my line of work, it may have been slightly cathartic to watch her do and say all the things I spend my days and weeks and life holding back. For that reason alone I recommend Matt, my valued colleague, to watch this movie stat. Aniston lets loose with

her performance; she’s the one to watch in this, and she’s the one who took me by surprise, and my laugh-spit sure took Sean by surprise (although Poots is also quite good, I can just never say her name with a straight face) (oh feck, more brackets). It’s not gonna be everyone’s cuppa, but while I started out this review calling this a Woody-wannabe, the truth is, I probably haven’t enjoyed an Allen film this much in years.

15 thoughts on “She’s Funny That Way”