The line to see Tom Hanks and John Oliver in conversation together wrapped well around the venue on Friday night. Sean and I had just seen High-Rise over in Chelsea and had 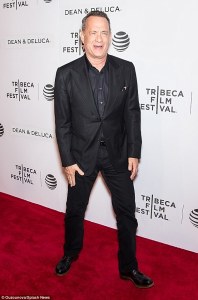 braved a crowded rush-hour subway to get back down to Tribeca and run right past the Ghostbusters building to arrive breathless at the Borough of Manhattan Community College only to be redirected to another entrance that meant dragging my swollen, sprained ankle several more blocks with the remnants of my back surgery burst open and freely bleeding just so that we could stand in line for 40 minutes and then be denied a seat. Denied a seat? But we had tickets in hand – tickets we’d paid for three weeks prior! But us, and the two people in front of us, and the hundred or hundreds behind us (hard to tell) were denied entrance because they’d way, way, way oversold the event and we were shit out of luck. We were also really, really pissed.

We weren’t yet yelling at the security guys because lots of other people were beating us to it. But when someone came out to the velvet ropes to say that one single seat had been found and was there a single person in the crowd, most of us just looked at our partners and shrugged. Except Sean. What Sean did was slap a ticket in my hand and shove me

toward the guy with the clipboard. He unclipped the rope and I was being ushered alone up a sad, empty red carpet, the very one we’d just watched John Oliver and Tom Hanks ascend, me still lumping my sore and swollen ankle along. I wasn’t happy to be going in alone and it was only the element of surprise that made me do it. I felt awful that Sean would sit outside with his $50 ticket to nothing, after having driven all the way from another bloody country, while I would be tickled fairly pink. Maybe even almost red. But the guy with the clipboard was so impressed with Sean’s self-sacrifice he basically invented another seat for him and got him in, even though he had to stand. I felt a little guilty because the couple in front of us rightly deserved those seats but hadn’t thought to split up (and actually, we’d already seen a few other singles be plucked from the line behind us) and a little guilty about the dozens and dozens behind us who hadn’t gotten in either, and super mad at the fuckfaces at Tribeca who oversold the event and didn’t tell anyone. But mostly I just felt elation the minute those two men took the stage, and fuck everyone else.

Some highlights of the evening:

-Tom said that without Oliver, our lives would be “void of outrage”

-He then made a reference to the Merv Griffin show so random and outdated that Oliver claimed that the lady holding the “Kiss Me” sign had slowly lowered it.

-Hanks cautioned us against asking “lazy journalistic questions”, basically anything starting with “What was it like…” and claimed that he was often accosted on red carpets

with “Just one question from Argentina!” and that one question invariably being something incredibly insipid. Oliver agreed that really Argentina should be asking for advice on their desperate economic situation.

-Hanks said that his distaste for social media was because he’d “peaked in the 90s” and Oliver ribbed him about using Twitter as a lost and found (you can Google it- Tom often posts pictures of wallets or lost gloves and tries to reunite them with their owners).

-Hanks and Oliver spar over the American Revolution, and we all find out that Hanks does an atrocious British accent.

-Hanks discusses the first movie he remembers going to the theatre to see – 101 Dalmations – and how it scarred him ever so deeply. Oliver then asks “So how the fuck did you become an actor?”

-Oliver claims E.T. as the first movie he saw in theatres, and his ensuing heartache over Elliott not joining E.T. in the end, which prompts Hanks to ask “How old are you???” (he’s 38).

-Oliver asked what kind of people Hanks prefers to work with, other than them “not being a giant asshole” to which Hanks replied “Sometimes that works.”

-Hanks did an awesome impression of Ron Howard, and confessed to learning about camera angles from Kevin Bacon on the set of Apollo 13. Bacon would suggest Howard use a “BFCU” of KB, which, for those of you not in the know, is a big fucking close up of Kevin Bacon. “God bless Kevin Bacon,” said Hanks.

-To see him do an impression of Robert Zemeckis (director of Forrest Gump, who he calls “Bob”), listen to what he learns from his failures.

-The work Tom’s most proud of? That Thing You Do, which featured his whole family, and was basically one giant love-in to make. He is particularly proud of the scene where the band hears their single on the radio for the first time because – name drop! – Bruce Springstein once told him that he’d experienced it himself exactly like that.

-Hanks told us that the genius of Invictus was that Clint Eastwood never taught us a single thing about rugby.

-The most obscure thing a fan ever yelled at him? “Little boat!” –  a line from the movie Splash which Tom himself had a very hard time placing, and almost had to IMDB himself just to scratch the itch.

-Which of his characters would he most like to have a beer with? Charlie Wilson, hands down.

-On the Disneyfication of characters:

-Hanks said “Movies that celebrate their own nostalgia are a waste of time” and I hope to god he meant Everybody Wants Some!!

-His most exhausting role? Woody, from Toy Story.  “It’s hideous making those movies” he claimed.

Anecdote after anecdote, Tom Hanks proved himself worthy of storyteller status. To those of you who didn’t make it in, I wish I could tell you you didn’t miss much, but the truth is, it was an unforgettable evening.