This German film by writer-director Piotr Lewandowski is beautifully shot with lush cinematography; you won’t believe it’s his first feature.

The theme is surprisingly mature as well. Jonathan (Jannis Niewöhner) is stuck at home working on the farm and caring for his dying father (Andre Hennicke). The relationship is 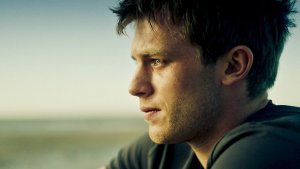 strained. There are whiffs of resentment. Luckily Jonathan has his father’s beautiful young nurse (Julia Koschitz) to distract him, but as the film lurches shakily through its middle third, Jonathan realizes that time is running out for his father and if the family secrets are to be unlocked, it’s now or never.

This movie is slow, sometimes maddeningly so. And the men in question are fairly reticent, so there’s a lot of sun-dappled quiet reflection, and a few close-up shots of bugs for good measure. The visual richness can contrast nicely against the jagged and raw emotions. These are the best of times and worst of times for young Jonathan. He’s discovering himself while losing his father. His sexual energy burns up his grief. The camera lingers on his angular body. This is the sexiest movie about terminal cancer you’re ever likely to see.

Secrets are poisonous, and they leave a large wake of destruction. Cancer is perhaps not the most devastating thing to happen to Jonathan’s family. And despite him being the titular character, this story is not Jonathan’s alone. He and his father both have truths to tell – if only they can find the words, and the courage.