Phoenix, Arizona is the kidnap capital of the world; as many as 1000 drop houses in the city are hiding kidnapped illegal immigrants from Central America. This movie is the story of one such house.

A dirty, dark room houses a bunch of underwear-clad men. Some have been there a long time, some are new. All are grimy, desperate, and scared. All are being held for $2800 ransom, which none have. Most have already spent their life savings to get this far – to America, land of the free. Land of kidnappers preying on the vulnerable. Land of guns, 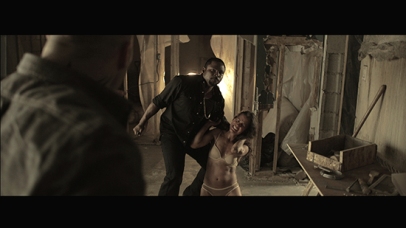 terror, and violence. Although they’ve dreamt their whole lives of a better life in America, most just want to go home. A few have nothing to go back to. Manolo, newly arrived, is mostly concerned for his wife.

The women have been contained elsewhere, maybe not being held for money, but held for other reasons – the kind of reasons that give husbands nightmares. So if money isn’t going to solve their problems (and they don’t have any anyway), looks like the only way to survive is by fighting, easier said than done when the captors are armed and motivated gangsters.

Writer-director Felipe Rodriguez gives us suspense and agony in Kidnap Capital. It’s gripping and heartbreaking and takes place almost entirely in one suburban home. I would have liked to have seen more of the outside world, not because the interior isn’t enough (I actually think the sense of claustrophobia is brilliant), but because this whole thing is

going down in a nice, friendly neighbourhood just like yours. Like mine. And it takes an awful lot of looking the other way by an awful lot of neighbours, cops, friends and family, for a kidnap ring like this to work. And this is going on TIMES A THOUSAND in Phoenix. So that’s a lot of selective blindness by a lot of “good people.” And that made me so sad.

Immigration isn’t an easy issue, but I have tonnes of sympathy for people whose lives are so wretched that they sacrifice and risk everything for the chance at a better life. I don’t know what the answer is, but I know they don’t deserve this. And this is real. It could be happening in your neighbour’s basement right now. With Sicario and Desierto and now this, movies are giving voice to a forgotten, helpless people. Human trafficking isn’t just a movie plot, which is why this one’s going to stick with me for a good long time.