Do I have a wine cellar? Yes I do. It’s quite nice. On any given day it houses exactly the number of bottles I neglected to drink last night. We are not wine snobs. We don’t even aspire to be. But as Sour Grapes will tell you, the world’s already got enough of those. Too many, maybe.

In the 90s, during the tech boom, people had too much money. “Fuck you money” they call it, the millions in excess, to be pissed away rather than spent. The kind of money I will never see and have a hard time just reading about. Riches needed to be conspicuous, so after the cars were bought and the art hung and rare coins sought out, they turned to wine, which can be literally pissed away given a certain amount of time. Wine became such a commodity that auction houses made bundles selling the stuff. Rare bottles were gobbled up; demand was high but resources extremely finite.

The “angry men” (so called because they’re the ones who bring exceptional bottles of wine to the dinner party while the rest of us just pick up whatever’s on sale at the grocery store and this makes them ANGRY) began hosting wine tastings where $200 000 worth of wine was consumed in a night. Auctioneer John Kapon pushed this new culture of big wine being sexy and exotic, and why not? It’s not like auction houses make a 20% cut on whatever they sell. And by golly did they sell: millions at a time.

Rudy Kurniawan was a buyer and a drinker. He chased the elusive bottles and dropped big cash on them. His palette was legendary. In fact, he was legendary. He was deliberately mysterious, and a mythology built up around him. But he was generous, gracious, and extremely well-liked and respected. He bought wine compulsively; some he drank, some he shared, and lots he turned around and sold for profit. 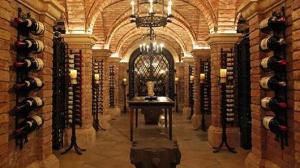 Until Bill Koch noticed something peculiar in his wine cellar that has more square footage than my house.  Among his 43 000 bottle collection (including 4 bottles reportedly owned by Thomas Jefferson for which he paid $100k per bottle) he started to notice some fakes. Those fakes were traced back to none other than Rudy Kurniawan.

It’s thanks to Koch and an honourable vintner named Ponsot that Rudy was eventually brought down (justice for Burgundy, Ponsot passionately believes). The story is pretty engrossing, and it turns out that even more fraudulent than the wine is Rudy himself.

The documentary also explores the collaboration between forgerer and dupe – obviously lots of people wanted and needed to believe their wine was real. Otherwise it’s just a bottle of vinegar the price of a Ferrari. They all wanted to possess something rare – maybe so rare that it didn’t even exist anymore. Or ever.

Bill Koch seems to have lost the taste for wine collecting since these events; he just sold 20 000 bottles for $22 million dollars at Sotheby’s. And yourself? What’s the most you’d ever pay for a bottle of wine? Go ahead and uncork (unscrew?) your favourite $10 bottle and watch this movie. It’s streaming on Netflix right now and it’s worth savouring.