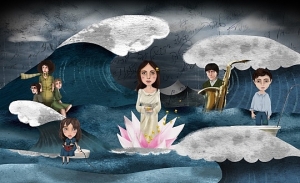 Like a Lotus Flower is both a memorial to a lost mother and an example of how death can decimate a family.  The story is told in a way that keeps the viewer guessing and even though that is frustrating at times, that choice definitely made me pay total attention to this film in order to figure out how each person fit into the narrative.

At base, this is Eliya Swarttz’s story.  She lost her mother, Hedy, to breast cancer at a very young age.  Eliya wrote and directed Like a Lotus Flower, and reflects on her past through a combination of home video footage, interviews with the other family members, excepts from her childhood journals, and animated sequences.

The artwork in the animated sequences is a highlight.  Tonally, the art is an extension of the title, the visual equivalent of a flower blooming from the mud.  It is beautiful, somehow bright and sad at the same time, and ties the interviews and video footage together nicely.

It’s quite a puzzle to figure this family out, particularly when Eliya’s first father figure is her dad’s brother, who not only introduced Eliya’s parents to each other but also professes a deep and complex love for Hedy.  He refers to their relationship as being one between two emotional cripples who were trying to save each other.  For reasons that are not really explained, Eliya’s biological father is noticeably absent from the film and Eliya’s life in general.

There are also other notable and unexplained absences that will leave the viewer guessing, but perhaps that is the point.  There is no rhyme or reason to life and death, and this film captures the ebb and flow of people entering and leaving our lives as we grow.  Asking why Eliya’s mother died or why her father is absent is as effective as shouting into the wind.  These events happened and Eliya dealt with them (and is clearly still dealing with them in making this movie), and she bloomed out of a difficult situation.

By the end, Eliya is able to admit to herself and her family members how difficult her adolescence truly was despite her brave face, and when she does it feels like a breakthrough.  Like a Lotus Flower allows the viewer to participate in that therapeutic process as Eliya reconciles with her past, and does so in a way that is interesting and relatable.

Like a Lotus Flower is part of the Toronto Jewish Film Festival, screening May 10 at 3:30 p.m.