Loving Vincent lives up to its name: a team of over 100 artists hand-painted each and every frame in this beautiful animated film. What better way to pay tribute to one of the most iconic artists the world has ever known?

The film takes place a year after Van Gogh shot himself and died of the wounds. In life, Van Gogh had painted a portrait of his post master. After his death, a letter of his, perhaps the last he’d ever 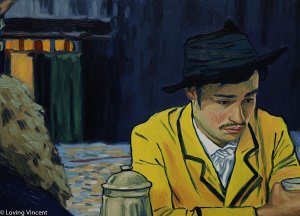 written, was returned, so the post master sends his son to deliver it. The post master is fully aware of the special relationship between Vincent and his brother, Theo, and is adamant the letter be placed in his hands, or in the hands of the doctor who cared for him in the last months of his life.

The young man’s special delivery unearths the events that led up to Vincent’s death. His suicide seems to have caught most who knew him off guard – he’d seemed particularly well right before it happened. The story unfolds in beautiful images done in Vincent’s own familiar, fanciful style – over 65 000 oil paintings were made for the film over seven years. That’s quite an act of love, and the first of its kind.

The movie is augmented with excellent voice work by Saoirse Ronan, Douglas Booth, Aidan Turner, Chris O’Dowd and more. The neat thing is the artists have incorporated their likenesses into the film without losing the authenticity of the characters who peppered Van Gogh’s life. The actors actually were filmed playing their parts, and all of this informed the artistic process. This is a really lovely film that treats its subject reverently, with the same sensitivity embodied by the man himself. There was so much more to him than what history remembers, and this movie restores some of what’s owed to his legacy.