Joan Didion: a woman I have admired and read widely for years and years and years. She’s an amazing writer, a voice of a generation, a literary journalist who went on to write plays, movies, and novels. She always had a different slant, a different take on what the world was consuming. So it was beyond time to produce a documentary that would pay homage to this fascinating, formidable woman. As Barack Obama said when he presented her with the National Medals for Arts & Humanities in 2013, “I thought you already had one of these.”

Anyway, it was about time someone demystified this iconic writer, and who better than her own nephew, Griffin Dunne, to tease the nitty gritty out of her. Having read nearly 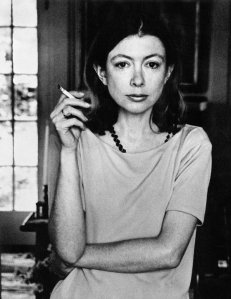 every book attributed to her name, I wasn’t sure that there would be much left for me to discover. But when Dunne asks her what it was like, in the 1960s, to have seen that 5 year old girl she once wrote about, the one tripping on the LSD her mother had given her. There’s a pause, and we mentally fill in the appropriately horrified responses, but instead she quietly says “Let me tell you, it was gold.” And that’s what made her work so riveting, her voice to incisive. She was a serious, ballsy reporter, and in a time when female reporters were rare and journalists of her ilk were unheard of.

Of course the film is a love letter; this is, after all, Dunne’s beloved Aunt Joan. And Aunt Joan is still Joan Didion, a woman notoriously strategic in her confessions. So although every word she drops is precious, it’s not overly revelatory. Her most recent works, A Year of Magical Thinking, and Blue Nights, deal with the deaths of her husband and daughter respectively. They’re a doozie to read, especially if you’re reeling in your own grief as I was a the time. They’re beautiful, gut-punchy, elegiac pieces of writing that are still entirely Joan. This documentary feels a lot like the third in the trilogy: it belongs. And it’s about Joan, inasmuch as Joan can allow it to be.

8 thoughts on “Joan Didion: The Center Will Not Hold”