Thurgood Marshall was the first lawyer working for the NAACP to defend people falsely accused of a crime because of their race. You may know him as the first African-American Supreme Court Justice, and this is one of the career-defining cases that set him upon that path.

The (true) story: Connecticut socialite Eleanor Strubing appeared on a highway in Westchester County, New York, soaked, beaten, and scared one night in December 1940. She claimed her chauffeur had raped her four times, kidnapped her, forced 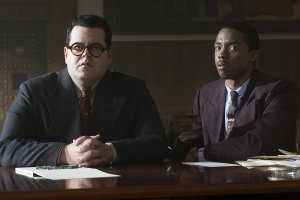 her to write a ransom note for $5,000 and then threw her off a bridge. Papers called her accused assailant the “Negro chauffeur” or “colored servant” but his name was Joseph Spell, and he claimed he was innocent. Lucky for him, his case caught the attention of the NAACP and Marshall was dispatched to try his case. Only he couldn’t; the racist judge wouldn’t let him on the grounds that he was “from out of town” so Marshall had to team with another lawyer and somehow stay silent through the infuriating trial.

Thurgood Marshall probably deserves a legitimate biopic, but this isn’t it. Its narrative is tight, keeping its eye on this single court case. The rest of his accomplishments are relegated to title cards at the end. That’s not really a complaint, but it does somewhat reduce a great man to a courtroom drama. But his greatness is communicated well by a self-possessed and commanding Chadwick Boseman in the lead role. He’s starred in a number of impressive biopics – what does this guy have to do to break through? Josh Gad plays the lawyer assisting him, Dan Stevens opposing counsel, James Cromwell the judge, and Kate Hudson as the woman pressing charges. And most interestingly, it’s Sterling K. Brown as the man who stands accused. Audiences will know him from This is Us, or else The People Vs OJ Simpson: American Crime Story. Even if Spell is innocent, Brown’s still playing against type, and it’s a great move.

All the pieces fall into place and it’s a perfectly solid movie. But for bearing the simple title ‘Marshall’ I expected it to be a little wider in scope – and having been baited with this little bit, I’m disappointed it wasn’t.