Seventeen year old Elio is facing another season at his parents’ summer home somewhere in boring, idyllic Northern Italy when the clouds part, the angels sing, and a yellow ray of sunshine pools on the golden head of a god, arriving by taxi. Actually it’s Oliver, a grad student about to spend the next 6 weeks helping out Elio’s father, a professor. Elio is immediately smitten.

It’s complicated, though, and it’ll take those full 6 weeks for the two young men to reach the peak of their affair. It’s the summer of 1983 and neither one is ‘out’; what we see is their friendship, the confidences they share, the fumbling flirtation. It’s a quiet movie, as 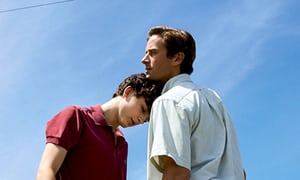 a movie must be between two characters who are still learning about themselves, and in some cases, learning to repress. The pace is languid, but after 132 minutes, I’m thinking more about what’s left out than what is covered. Elio (Timothée Chalamet) and Oliver (Armie Hammer) share a mostly silent passion. Have they ever been attracted to men before? Are they afraid of being seen? Their affair exists within a bubble – isolated in a small village, surrounded by intellectuals, sheltered. But there’s always a sense that the affair cannot last.

We feel the blush of their first love. But director Luca Guadagnino does not want us to see much more than that, does not want the reality of gay sex to change the tone of the movie. Why doesn’t he trust us? In an otherwise beautiful film about desire, theirs is the only physical intimacy that we don’t see. When one of them hooks up with a woman, we eavesdrop on their thrusting and grunting. We even get fairly graphic with some person-on-peach sex. But when Elio and Oliver come together the camera looks away. The only real nudity is female.

And that has left me feeling off-balance. I can only praise the performances by Hammer and especially by Chalamet – his energy, his wit. Although Elio is the younger of the two, and voices more self-doubt, we actually see them negotiate a balance in their relationship that feels very healthy and mature. And though Oliver is adamant that he wants neither of them to get hurt, we see how woundable Elio really is, how vulnerable. This isn’t just love but self-discovery, mutual discovery, only some of which will be lasting.  Elio’s father (Michael Stuhlbarg) counsels him to stay this way, thin-skinned, to not close himself off to pain, even in heartbreak. And Oliver wonders if that’s the real difference between the two: not their age or experience, but their parents. And we’re left to think on that as the credits roll. Who might they have been had they both had supportive families? It is in these final minutes of the film when we finally feel emotionally connected to the material, and to the characters. This is the beating heart of the film. It’s just too bad it’s saved for last.

23 thoughts on “Call Me By Your Name”