Darkest Hour should maybe be called Darkest Month. In 1940, Winston Churchill was asked by the King to take over as Prime Minister. It was a shitty time to get the job: Hitler was marching his Nazi army across Europe, and the threat of invasion was uncomfortably close. During this particular month, Churchill’s first on the job, he’s got an impossible task. He must decide whether to negotiate a treaty with Hitler, or whether to stand firm against the Nazis but in so doing risk his country. And he had to do this without his party’s support or the public’s understanding or any help from the King.

Winston Churchill is an iconic and influential figure in British history and he’s been portrayed with varying success by some truly venerable actors:  Albert Finney, 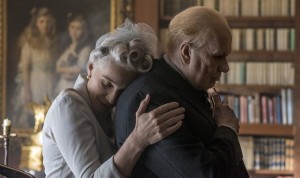 Brendan Gleeson, Timothy Spall, Robert Hardy, and most recently by John Lithgow in The Crown. He is not a saintly figure. He was a great orator but had some problematic positions that hindsight can’t afford to be kind about. Portrayals of him often emphasize his omnipresent cigar, and his particular style of speech (his custom dentures helped cover up a lisp). Gary Oldman is the gentleman tasked with bring old Winnie to life in Darkest Hour, and though he’s seen chomping on the necessary cigars, he turns the performance into something truly remarkable.

Oldman is transformed by makeup and prosthetics; his jowls are considerable. His tics and posture help render him unrecognizable. He dissolves into character. As Churchill he delivers some of history’s most famous and familiar speeches and he is electrifying. Kristin Scott Thomas as his tell-it-like-it-is wife, Lily James as his newbie secretary, and Ben Mendelsohn as the King help round out the cast but Darkest Hour feels like a one man show and Oldman is equal to the cast. Truthfully I don’t know many others who could carry 125 minutes of infamy, but Gary Oldman deserves his frontman status in all the Oscar pools. His portrayal is vigorous and complex and maybe even a little bit compassionate.

As for the movie itself, it’s not quite as formidable. The events are told simply, without a lot of cinematic flair, and it sometimes feels sluggish. There’s not a lot of imagination on display, and perhaps that’s an unfair criticism with the burden of historical accuracy weighing heavily, but director Joe Wright is more precise than entertaining. It’s Oldman who kept me in my seat, and I’m sure it’ll be Oldman bounding out of his on Oscar night to collect his well-deserved award.