In light of recent events, I feel obligated to point out that the title of this film refers to the fictional species of intergalactic trophy hunters, not director Shane Black’s real-life registered sex offender pal who was somehow cast in a bit role here (whose scene was then removed from the final cut when his sex offender status came to light).  With that major misstep remedied, though not forgotten, the latest entry in the Predator franchise arrives with the theme of evolution underlying the on-screen battles between humans and giant fang-faced aliens.

The ever-evolving Predator crash lands on earth and interrupts a U.S. sniper’s top secret Mexican mission. After ejecting from its ship, the Predator kills the sniper’s support team but the sniper (Boyd Holbrook) manages to escape, mailing a few pieces of the Predator’s gear home as evidence of the encounter. The gear finds its way to the sniper’s son (Room‘s Jacob Tremblay), who figures out how to activate it and in doing so becomes the Predator’s target. The army is no help in containing the Predator so the only ones standing between the Predator and the rest of the world are the sniper, a biologist (Olivia Munn) and a misfit group of soldiers. And the fight is on!

In addition to being a key plot point, the concept of evolution looms large for me as I reflect on this film, because the Predator series has definitely evolved. It’s so much different than the cheesy action/horror nostalgia trip I expected to see. The Predator is a gleeful, self-referential comedy that takes more pleasure in delivering quick, clever banter than it does in splattering the screen with gore.

Make no mistake, though. The Predator is an exceedingly gory film. Faces will be ripped off. Bodies will be sliced into pieces. Internal organs will ooze out of gaping wounds. That, more than anything, illustrates how consistently funny the Predator manages to be, because comedy is the film’s dominant element even in the presence of buckets and buckets of gore.

Black is known for his action-comedies, and his script for Lethal Weapon is rightly recognized as a standout in the genre. An evolution, even. Thirty years later, Black is still rolling along. A bit player in the original Predator (his character lasted all of seven minutes), Black now directs and co-writes (with Fred Dekker) the 2018 version, which is not a reboot of the original. Instead, it revisits what has come before to tell a new story and, by the end, sets a whole new course for the franchise that is as intriguing as it is ridiculous. 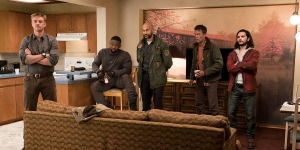 Of course, ridiculousness is a Black staple and while Predator does not quite measure up to Black’s best (namely, the amazing Lethal Weapon), it is a wonderfully entertaining film thanks to Black and the extremely solid cast. The standouts of the teriffic ensemble are Tremblay as the protagonist’s code-cracking son and This Is Us’s Sterling K. Brown as a scenery-devouring special agent whose motives are never clear but always nefarious. The Predator keeps up a steady stream of action and laughs from start to finish, and as a result, I’m now waiting eagerly for the even-more-ridiculous sequel that the Predator blatantly and shamelessly promises.

18 thoughts on “The Predator”