If you were present in the literary world of the early 2000’s and you have a sharp memory, you may remember JT (Jeremiah Terminator) LeRoy as the author of a New York Times best-seller, Sarah. That is a true thing that happened.

Now here’s where it immediately gets messy. JT LeRoy was a teenage truck stop prostitute who idolized his mother Sarah, also a hooker. Except JT wasn’t actually a real person, he was just an “avatar” used by the book’s real author, Laura Victoria Albert, who developed the pseudonym in the 90s while calling suicide hotlines. She found it easier to talk about her pain if she attributed it to someone else, and she 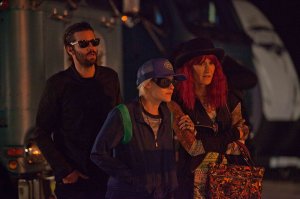 found male identities received more sympathy. Eventually she found a way to turn it into art, and several stories and books were published under the name. She wouldn’t be the first writer to write under an assumed name, but she might be the first to have gone to such great lengths to present a pseudonym as a real person. She recruited her boyfriend’s androgynous sister Savannah to “play” JT in person, granting interviews and posing for pictures as him – even signing the rights to a movie contract. Of course, when the truth comes out, as it nearly always does, the world was kind of mad about being duped, and there was a big backlash.

So that’s the true, and truly weird, story explored in the film, where Laura is played by Laura Dern and Savannah/JT is played by Kristen Stewart. Laura does all the talking over the phone (as a phone sex operator, she has a knack) and Savannah plays it cool and quiet in public. But both of them grow increasingly attached to the character and are possessive of him – particularly when a beautiful actress/director gets involved (Diane Kruger). Of course, the fun doesn’t stop there. Laura develops other personas, like Speedie, JT’s obnoxiously British manager who mysteriously and confoundingly does a lot of his talking for him during interviews.

Every year at TIFF, there are certain themes that pop up. This year it’s addictions, and also cops killing black kids. But a third, and quite odd theme, is literary hoaxes. Melissa McCarthy plays a forger in Can You Ever Forgive Me? and Aaron Taylor-Johnson plays controversial memoirist James Frey in A Million Little Pieces. Jeremiah Terminator LeRoy provides two very juicy roles for Dern and Stewart, and the tension it creates between them is pretty addictive in itself. Stewart is cast to perfection and in JT’s gender-neutral shoes, themes of sexism and identity leap out so easily. Laura Dern is similarly well-matched, and she somehow makes the juggling of personas look easy. We get the sense that Laura feels her limitations in the field keenly, while Savannah embraces this shadowy second life, perhaps feeling a bit freer in a wig and dark glasses.

I thought Laura deserved a bit more from the script, and the end in general needed a little more oomph in order to match the intensity that comes before it, but this is an interesting story you have to see to believe, with 2 out of this world performances. You should take all of your personalities to the cinema to see this one.