Donald Crowhurst is hawking navigational tools for sailing that nobody really wants. When a contest is announced that would reward the fastest sailor to navigate the globe without stopping, Crowhurst decides it’s the perfect way to showcase his product, generate press, and make himself known. He’s the last man in the water, but he hopes to make up for it by speed. The problem is, he’s just a hobbyist, an amateur sailor, and he’s going up against the world’s best.

Of course, sailing around the world is the kind of competition that’s very solitary, and 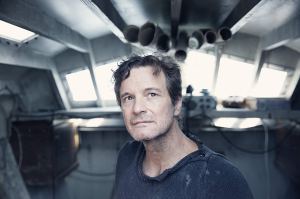 difficult to measure. The irony is that though he’s a master of navigation, sailing-wise, it’s being away from his family that is disorienting to him. Out on his boat, alone for months, never seeing land, rarely hearing the voices of his children, Donald (Colin Firth) goes slightly mad, as one would. It’s a test of endurance, but also of mental fortitude. Though the sea and the elements thwart him at every turn, he himself is his biggest obstacle, and every day is a struggle not to quit.

At home, his wife Clare (Rachel Weisz) tries to keep the family afloat while putting on a cheery face for the children even though she frequently doesn’t know if her husband is dead or alive.

Because they’ve bothered to make a movie out of this ‘incredible true story,’ I thought I knew how it would go. I was wrong. The Mercy doesn’t exactly break new ground cinematically, but thematically it’s as crushing as it is absorbing. Colin Firth is astonishing. Frequently on screen alone, his descent into madness is magnetic. It glues your eyeballs to the screen. Rachel Weisz is no slouch, of course, but as the little woman back home, she’s given much less to do other than look fetching in a head scarf. However, when the film does call on her to be something more, you know she answers is as only she could.

The Mercy is a big lungful of salt water. It’s a surprise. It gives you a jolt. If Colin Firth is the film’s compass, Rachel Weisz is its buoy.