Has there ever been a film so tailor-made to make me feel smug and superior?

Our culture has devolved into phone-obsessed automatons, but some of us are not content to simply post and share memes – some of us want to star in them.

Bert Marcus’ documentary focuses on 4 such persons, intent on their 15 minutes of internet fame:

Paris Hilton (@parishilton) of course blazed the blue print for internet stardom, for “reality” stardom of any kind, really. But she parlayed her hit TV show persona into an empire that she rules from social media. Her fans are her kingdom and she lives for them. She relates more to her followers than she does to her own friends. Perhaps the line between the two has been permanently blurred for her.

Brittany Furlan (@brittanyfurlan) moved to LA to be an actress but as for many others, her auditions went nowhere. But she was intent on becoming famous at any cost, and Vince was a platform where 6-second videos could net millions of views if they were funny enough. So Brittany embarrassed herself for the camera and the people came to laugh and point. And rack up views. 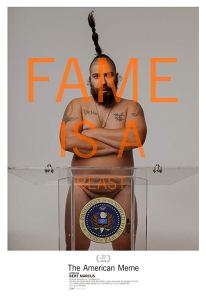 Josh Ostrovsky, better known as @thefatjewish, is the king of displaying himself for the enjoyment of others. Often naked, nearly always disgusting, he became famous for stealing other people’s funny memes and making loads of money off them.

Kirill Bichutsky  (@slutwhisperer) took that one step further. He was an almost-legitimate photographer who recognized that he got way more attention by posting pictures of nearly-naked women with his infamous “champagne facials.”

With interviews with other internet-enabled celebrities like DJ Khaled, Emily Ratajkowski, Hailey Baldwin-Bieber, and Dane Cook, Marcus explores the dark corners of internet fame, and how quickly it is changing. When social media was young, you could go viral by stuffing as many of your friends as possible in a phone booth. Now you have to risk your life by eating Tide Pods. Which really makes you wonder why internet fame is so damn alluring that these stupid kids will go to such lengths. And yet, go anywhere. Anywhere. And try your best to spend 10 seconds without getting bumped by someone who insists on being ambulatory while staring solely at their phone. And I don’t mean to single out the young folk, because older folks are just as guilty. I love a documentary that can reflect our culture and make us think about it critically. Marcus doesn’t ask a lot of questions, he mostly just leaves the evidence there on the table, and it’s up to you to take the picture and post it.

7 thoughts on “The American Meme”