Epcot is probably the weirdest of the Disney parks. It’s home to the World Showcase – basically, 11 countries have pavilions dotted around a large lake. You can pick a pearl in Japan, drink tequila in Mexico (and seem some wonderful Coco-inspired folk art), ride Frozen Ever After in Norway, and eat poutine in Canada. Belle is seen in France, Snow White in Germany, Mulan in China.

It also houses Future World, which will test your mettle with rides like Test Track (build a car for the future, and the whip around the track in it!), Soarin’ (actually feel like you’re flying – not for those with a fear of heights), and Mission: Space, which is a NASA shuttle simulator that once made me want to die.

But most of our time was spent in the other end of the park, home to Nemo and friends. The Seas with Nemo & Friends gives you a fun, musical recap of the movie and spits you

out into real-life aquarium. Kids who have been kept within strict arm’s reach all week have a bit of room to run and explore as tunnels lead you through the waters of Disney’s many impressive tanks, filled with clown fish like Marlin and Nemo, and blue tangs like Dory, and an awful lot more. Brady loved to spot the turtles, and Jack was more entertained by the human diver who appeared to be doing some caulking. Their dad was happy to see some manatees while the rest of us played spot the shark and count the rays. There’s also Turtle Talk with Crush, which is a fun, interactive show, wherein the cool surfer dude talks directly to the kids in the audience. We had so much fun with the fish, we decided to go for lunch at the Coral Reef. That sounds a bit cruel, doesn’t it? Especially since Sean DID order the mahi mahi. Okay, and I had lobster mac and cheese. The restaurant features an entire glass wall that gives live views of a living coral reef. Each table gets a card (that looks suspiciously like a menu) so you can spot and identify the fish within. I especially loved the unicorn fish, which are totally a thing!

Anyway, Epcot was fun and all, but we called it a day a bit early because Sean and I were taking the two boys to the Art of Animation hotel for a night, to give their parents a break and to have some extra special fun. The Art of Animation is a Disney hotel on the property that has themed rooms – The Little Mermaid for couples or small families, and suites in the style of The Lion King, Finding Nemo, or Cars. The boys being Cars super fans, we of course chose that one. The room is extremely well-appointed; the couch looks like the backseat of a car, and it folds out into a bed (odd how much this impressed the kids); a table likewise hides a Murphy bed, and that was also so much fun they decided to sleep in BOTH – and did actually switch beds during the night. There’s a coffee table that looks like a map of Radiator Springs, and a chair made of tire rubber, with treads, and the lamps look like traffic cones, and the kitchenette looks like those heavy duty tool chests you’d normally see in a garage. But the real fun is outside: the property is dotted with friends: Mater, Doc, Sally, Luigi and Guido, Ramone, and of course Lightning McQueen. The pool is styled after the Cozy Cone Motel, and a giant orange pilon served as our cabana. But further down, the Finding Nemo pool is even bigger, with a splash pad, and all the fish friends you’d expect to see. And even further are Timon & Pumba, Scar, Simba, and Rafiki, and an elephant graveyard to play in, and lastly, a whole bunch of Ariel’s collection, thingamabobs and dinglehoppers galore, plus Ursula, King Triton, and the Little Mermaid herself, all surrounding yet another pool. We swam, of course, in two of the pools and one of the splash pads. We even watched a bit of Up from the pool, which the boys thought was the bee’s knees.

Oh and Sean and I went to eat at Cinderella’s Royal Table. You know that big ole castle that’s the iconic backdrop to the Magic Kingdom itself? Yeah, we ate there, no big deal. And we met Cinderella! And her friends: Snow White, Aurora, Ariel, and Jasmine, who asked me if Sean was my “diamond in the rough.” I must have looked skeptical because she then offered “…in the scruff?” and she nailed it because Sean never fails to ‘forget’ his razor when we travel. Not only did we feast on The Clock Strikes Midnight chocolate mousse, and a white chocolate glass slipper, and some Francis Ford Coppola merlot, we had a window seat for Disney’s famous fireworks show. #Spoiled. 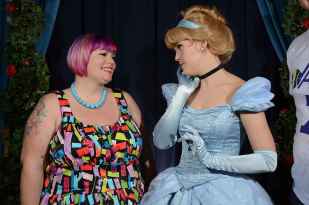