A Beautiful Day in the Neighborhood is a beautiful excuse for a movie, but it is not a Mr. Rogers biopic.  It’s more like if this week’s episode of Mr. Rogers was tackling the theme of Lloyd Vogel (Matthew Rhys), who just happens to be a journalist who meant to write a Fred Rogers profile once.  And he didn’t really succeed – he wrote 10,000 words, mostly about himself.  But it was meeting Mr. Rogers that inspired and enabled him to start to process his childhood trauma and deal with his feelings.  The movie ends up being a 70-30 split, and not in Mr. Rogers’ favour.  Which isn’t a bad thing necessarily, it’s a reminder of the profound impact that Mr. Rogers’ love and 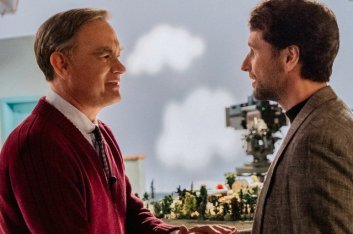 acceptance had on all of us.  Above all, he taught us it was okay to feel.

Lloyd Vogel is a cynic.  He normally writes about a broken world.  He’s not thrilled to be writing about a children’s television show, and he’s determined to see the star’s mask slip.  To see that Mr. Rogers isn’t a goody-two-shoes character but rather Fred Rogers’ honest expression of his best self is hard for Vogel to accept.  Meanwhile, Mr. Rogers sees through him – sees his anger, recognizes it for pain, and has a healing effect, despite Vogel’s resistance.  With a newborn baby at home and an estranged father who’s reappeared only to announce he’s dying, Vogel’s life is perhaps in need of some friendly ministration.

Director Marielle Heller finds exciting and innovative ways to frame the story, except she stole them all lovingly and conscientiously from Mr. Rogers himself.  It’s a way to honour what was truly special about his show – everything way thoughtful but low-tech, without fuss or flash.  The continuity was comforting.  Of course, the most incredible coup is the casting of Tom Hanks in the iconic cardigan.  He’s wonderful, channeling Fred Rogers’ sense of calm and peace.  His signature style of slow, deliberate speech is such a balm to those he’s talking to – it is rare to feel the scope of someone’s focus.  It’s also hilarious to watch his producers lose their shit as the time and attention he gives each guest means their show is constantly behind schedule.

It’s a Beautiful Day in the Neighborhood isn’t exactly the movie I expected, but it took me through all the feels (weep count: 3) and left me feeling like a very valued neighbour indeed.  Mr. Rogers has always said that he tried to look through the television into the eyes of one individual child.  Today I was that child, and I think you will be too.

14 thoughts on “TIFF19: A Beautiful Day in the Neighborhood”