Mrs. Wong (Teresa Mo) is too exhausted to care that her husband is having an affair. She tolerates it in order to keep her family together, especially important since her 20 year old son Kwong (Man-Lung Ling) has autism, and developmental disabilities, that require stability and a lot of care. But one day the young mistress (they’re always young) stops by the house and agitates Kwong. After a terrible fight, Mr. Wong (Ray Lui) leaves. He leaves them. Now the burden of caring for her disabled son falls to Mrs. Wong entirely, and with his father gone, he’s acting out more than ever. If she was tired before, she’s beyond tired now. There’s almost nothing in Mrs. Wong’s life that’s just for her – her only indulgence during these dark days is to plot revenge scenarios against the dreaded mistress. 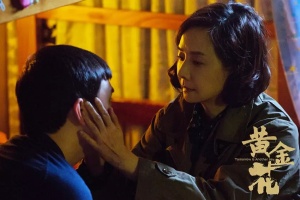 believe from the outside all the difficulties they face. But Mo and Lui are good at communicating a marriage strained by years of putting someone else’s needs above their own, of never having the time to honour their coupledom. We know that this is not Mr. Wong’s first dalliance, and we see the toll it’s taken on their marriage.

Ling’s portrayal of special needs is perhaps not the best we’ve seen on screen, but it’s Kwong’s relationship with his mother that is the most essential of the film. He’s normally cheerful and energetic; he skips along, vocalizing sounds more than words. But his meltdowns are ferocious. A full-grown man, when he starts self-harming, Mrs. Wong really can’t cope on her own. By showing us the enormity of her caregiver’s role, director Chan Tai-lee (the guy who wrote Ip Man) highlights a dearth of resources, of respite. Mrs. Wong shoulders it all, without complaint, facing down discrimination like that’s to be expected. All of her anger and resentment are saved for the mistress (a one-note, selfie-taking villain); murder fantasies are her only escape.

Her social life’s only balm is a group of housewives with whom she sews and sings karaoke. But these are the same women who will uncover her plot. And then what? You’ll have to watch to the end to find out.

Masato is a young man working in his father’s successful ramen shop in Japan. Though it’s just been the two of them since Masato’s mother died, their relationship is strained. Masato thinks the only way to get his father’s attention is to be a steaming bowl of noodles. After work, Masato’s father disappears to drink alone; at home, they’re like two ships passing in the night. But then one day his father dies, as all fathers must, and Masato is alone in the world.

Curious about his mother, Masato (Takumi Saitoh) reads the old diaries she’d left behind and for the first time discovers the inter-racial courtship between his father, who was Japanese, and his mother, who was Chinese, and understands the source of the rift between his mother and his grandmother that prevented them from reuniting even as his mother lay dying.

Masato decides to travel to Singapore where he’s introduced not just to long-lost family members but secret family recipes as well, and through food, culture.

Ramen Shop is slow to start. I didn’t feel emotionally invested until about half-way through, but once the delicious, 10 hour pork rib soup starts to simmer, so did my heart.

The cast is endearing, and I love how director Eric Khoo blends together race as if it’s fusion cooking. The Japanese and Chinese people have had an uneasy past and you can see that Masato has a hard time reconciling the two parts of himself. However, grief is a powerful motivator, and when he understands how his father honoured his mother’s memory by incorporating her culture into his cooking, Masato is inspired to do the same.
Since Masato and his uncle and cousins speak different languages, they communicate primarily in their shared third language, English. His grandmother, however, does not speak English. Masato speaks to her on a more elemental level: food. He cooks for her and hopes his dish will prove not just love, but the link that’s been missing between them all these years. This detail felt so familiar to me. It may not always be ramen, but almost all families across many cultures have some dish they call their own, a dish that tastes like home.

For me, it’s my grandma’s molasses cookies. She’s been gone 15 years but one of my most treasured items is a recipe for them in her own hand. I make them for my niece and nephews who never met her but still enjoy the same treat I did growing up, and I know her love is in each bite. My other grandma, who I call Nanny, stood by my side in her kitchen and taught me how to make her apple pie when I was a girl. Today pie crust comes out of my hands instinctually. I don’t need to make Nanny’s apple pie because we’re lucky to still have her with us (though we did lose the apple trees in her backyard). She assures us that her chest freezer is well enough stocked that we’ll have apple pies well after she’s gone. I’m pretty sure she means that to be comforting. What’s the recipe in your family?

Bacchus ladies are elderly Korean prostitutes, a fact of which The Bacchus Lady kindly informs the viewer. We are introduced to So-young, the titular bacchus lady, as she enters her doctor’s office and learns she has gonorrhea, which obviously is bad for her business. As she leaves the clinic, she happens on a young boy and takes him in because his mother has just become indisposed (due to her stabbing the doctor), setting us up for some odd-couple-style hijinks between this mismatched pair who are separated by 60-odd years. Or so I thought.

It turns out that this is not a comedy. Not even a little bit. The Bacchus Lady is a melancholy look at aging where the little boy and all other characters younger than 60 are incidental, and the characters over 60 are longing for death. The Bacchus Lady is tragic in so many ways. Through the eyes of So-young, we encounter many seniors who live without joy, love, or purpose. So-young brings brief respite using her special skills, but the feeling is fleeting and leaves everyone wanting more, including So-young herself.

Sadness abounds in The Bacchus Lady, even before she makes an abrupt transition from prostitute to a grimmer kind of service provider. I was rooting for her to find a glimmer of hope somewhere but her surroundings didn’t provide it and she couldn’t have seized it anyway. She was in too deep to begin with and everything she encountered only drove her deeper into the muck, from the kid, to her clients, to a chance encounter at a KFC.

So-young’s story is simply heartbreaking. Not only is she a castaway in a sea of regret, she is just one of many old souls who are adrift. It is almost unbearable, and the worst part is that The Bacchus Lady makes you wonder how many real-life seniors are feeling the same way as So-young and her clients. I guarantee that The Bacchus Lady will make you want to hug your grandmother, so give her a call and meet her for tea after the show.

If you are facing a life-threatening disease, finding a bone marrow match for donation may be life-saving, even a cure, but as we all know, people languish on lists waiting for matches and sometimes die before they ever find one. For people of mixed race, finding that match is so much harder, akin to finding a needle in a haystack.

Mixed Marrow is an organization that helps people find those elusive matches. It is dedicated to finding bone marrow and blood cell donors for patients of

multiethnic descent. Before I watched this documentary, I didn’t understand that these matches tend to be found within one’s own race, and how limiting that can be for all kinds of people. Multi-ethnic backgrounds are the fastest-growing demographic, but the waiting lists aren’t keeping up, leaving multi-racial patients struggling to surmount complex genetics on top of everything else. It’s already tragically unlucky to be struck by a stupid disease, but to fail to find a match because you’re losing at a numbers game? That’s just unacceptable.

Mixed Match is a solid documentary by Vancouver filmmaker Jeff Chiba Stearns, one that blends medical research and personal stories that make sure we remember that this topic is literally life and death. Brave patients and families share their stories, some of triumph, some of heartbreak, to help educate us while also personalizing the urgency. Cute animation helps us break down some of the more challenging science. But nothing makes a sick kid okay. That’s never easy to watch, nor the helpless of desperate parents.

Mixed Match, more than just a documentary, is a call to action. The only way to achieve more happy stories of survival is to expand the donor registry. Race is part of medicine. Our genetics have something to do with our ancestry, and where we come from. And we’re all multi-racial, in way or another. Lots of us don’t even know all the combinations that may be forgotten within our lineage.

Mixed Match, while dealing with a serious subject, is very hopeful in its heart. There’s an answer here, and the film exuberantly charges us to be part of the solution.