Merida may be a princess, but she’s no lady. After reluctantly performing her royal duties, she’s happiest riding her horse and shooting her bow and arrow – not feminine pursuits, according to her mother, but Merida is a daddy’s girl, and he indulges her. But even the King can’t save her when it’s time for each of Scotland’s clans to send forth a suitor to compete for her hand in marriage. It strikes Merida as almost as barbaric as it does you and I, but Merida’s mother has some very convincing myths to back up the obligation, and anyway, nobody really has any choice – for crown, for country, for glory and all that.

Anyway, Merida’s father, King Fergus (Billy Connolly) is a big beast of a man, who

loves to tell the story of how he lost his leg fighting Mor’du the bear at a family picnic, protecting his wife and baby daughter. The Queen, Elinor (Emma Thompson) tolerates his boastful storytelling, and only rolls her eyes a little when Merida (Kelly Macdonald) embellishes right along. But Elinor knows that this betrothal stuff is serious business.

And Pixar knows that to Disney, this princess stuff is serious business. Still, they challenge the notion of what a princess should be, with Merida mucking out a horse’s stall herself, her fiery, unruly hair streaming behind her, big ideas broiling in that red head of hers. When it comes time to compete, Merida competes for her own hand in marriage, ripping the seams of her dress in order to win the day. Does her mother find this an ingenious solution? She does not. Still, Merida is Disney’s first princess without a love interest (but not its last – hello, Elsa!). Anyway, mother and teenage daughter fight, predictably, only Merida has something most teenage daughters luckily do not: access to a witch (Julie Walters). She conjures up a special potion which, when fed to her mother, will “change her fate.” And indeed it does. By turning her mother into a bear.

Pixar, as always, gets a lot right: Merida’s hair is gloriously animated (they had to invent new software to properly render it), the sun dappling is gorgeous, and there’s this moment of goofy pride on the mother bear’s face that just warms the haggis in my heart. If we must life in a world full of princesses, may they be more like Merida – brave enough to stand up for themselves, to stand on their own, to pursue their own ends.

This week Sean and I are at Disney World with my sister and her husband and her two sweetie pie boys, who are probably running through the parks like adorable hooligans, leaving us adults gasping for breath. If we have a spare moment, we might even meet Merida herself. Aside from appearing with other characters from the film in one of Disney’s many parades, she meets and greets wee lads and lassies inside Fairytale Garden, where you can also try your hand at archery, colour your own tapestry, or a picture of her horse, Angus. 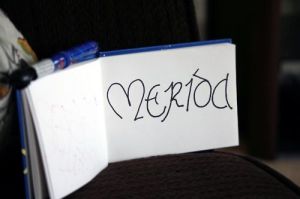 Brave came out before either, or in fact any, of my nephews was born, so I’m not sure if we’ll stop to get a picture with her – although the pair are armed with autograph books, so who knows. When a “cast member” of the Disney parks becomes a princess, one of her most important duties is practicing her distinct signature. Merida’s looks appropriately auld. There might be dozens of women who play Merida at Disney World, but they will all sign her name exactly this way. Disney is rather strict about its magic.

Abi and Doug take their kids on a little holiday to Scotland where grandpa Gordie is celebrating a big birthday – and possibly his last. It’s the cancer, you see, which is why Abi and Doug are determined to keep a wee little secret from his dad: they’re divorcing. Have been acrimoniously separated for quite some time. So of course they’ll have to enlist their three precious children into this lying scheme of theirs, and of course that’s not going to be easy. The eldest child is just starting to think that lying is wrong, and being forced to lie by the people who have always taught you not to is just a little hypocritical. The two littler ones are just straight up liabilities. So this is going to be a fun holiday!

I clicked on this because I saw Rosamund Pike plays Abi (and David Tennant her ex-husband) but was most pleased to find Billy Connolly playing grandpa Gordie. He brings such a unique energy to things, I was immediately swept off my feet. And this

is not exactly an excellent movie. But Connolly is pretty much everything you could ask for and more, and the kid actors are a goddamn delight. They’re mouthy and disarming – the kind that completely enchant you, unless they’re yours. But they’re not, so you can sit back while your own are in bed and watch their antics, guilt-free. Because oh yes, there will be antics. It’s a silly little film that, in the end, I enjoyed quite thoroughly. It’s a notch above a time-waster; a movie that doesn’t need to be seen with any pressing urgency but if you come across it randomly you might find yourself pleasantly surprised, as I did.

Billy Connolly was diagnosed with Parkinson’s and prostate cancer right before filming began. He kept that to himself. He has stepped out of the spotlight since and his health is failing; he shocked people with his altered appearance when he made time to do a Red Nose video for charity earlier this year. I can’t quite bear to contemplate a world with Connolly in it. If you’re a fan of his, maybe watch this movie now, while the memories are still good.

We find three friends living in a nursing home for retired musicians. They have performed together, years ago, and remember those days fondly, but their days of entertaining are not quite over. The home puts on an annual show and everyone’s busy preparing for it, as well as preparing for a new resident – rumoured to be quite a star. And as she pulls up in a chauffeured car with her many furs and jewels, Maggie Smith is every inch a star.

The trio of friends is in upheaval – Cecily is ecstatic to reconnect with an old friend, but Reginald is angry to find his ex-wife now living in the same home. Reginald’s best friend and one-time best man Wilf (played by Billy Connolly) tries to keep the peace but soon they must all work together because age and failing health has jeopardized the show, and the quartet must replace the last act, currently hospitalized, to ensure enough money is raised to keep the home solvent for another year, although Jean (Smith) has vowed never to perform in public again.

Okay, so the plot is predictable. Will they sing together once again? Of course they will. We’d be watching four more amenable geezers otherwise. The meat of the movie is more in the subplot, the pain between Reginald and Jean and their heartbreak still palpable after all these years. The joy of this movie is seeing all of these musicians, in the “encore” of their lives, still burning with passion for their craft. Even with dementia creeping in, music is the last thing to be forgotten. Director Dustin Hoffman does a lovely job juxtaposing the ailing bodies with spirited music, arthritic fingers still finding all the right notes, voices cracking with age but still filled with dignity and resonance.

Of course Billy Connolly injects a lot of energy and charisma into the film, providing lots of light counterpoints. It’s an enjoyable film that gives you lots to admire. I particularly enjoyed that the supporting cast is made up of actual retired stage performers (check the credits for their past work). Oftentimes when watching a British film, it’s like watching a reunion of old friends. When Maggie Smith appeared, I was watching over her shoulder for Penelope Wilton, who never appeared, but the ghost of The Best Exotic Marigold Hotel was a bit of a specter in this movie, and anyone who enjoyed that one will find satisfaction in Quartet.

p.s. If you enjoy this movie, and maybe even if you don’t, you should check out Young at Heart (2007), a documentary about an elderly chorus group who enjoys singing rock, punk, and all kinds of unexpected tunes. Really good stuff.