Lara Croft is the tough and independent daughter of a wealthy adventurer who disappeared 7 years ago and is presumed dead. So when she learns his secret obsession with an ancient Japanese myth, she pursues him to the unknown island that seems to have swallowed him whole. It seems like a really bad decision to follow in the footsteps of a dead man, but Lara (Alicia Vikander) doesn’t just put her life on the line, she involves an innocent stranger too (Daniel Wu), just as her father did. So if you’re wondering who the Croft family is, they appear to be in it solely for themselves, and fuck every body else. 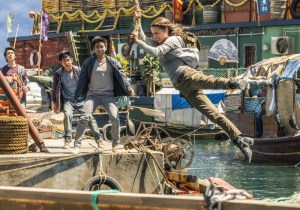 of worse.  And even though she’s been violently shipwrecked and then hunted, actually hunted on an island that seems intent on killing her, she somehow maintains a perfectly shaped brow and stubble-free armpits, which are constantly on display thanks to a skimpy outfit that seems particularly ill-advised when visiting malaria-infested countries. So while Lara may be about to out-box me, I’ll still take the victory because I packed the DEET. Though I suppose I should concede that the Vikander version of Lara is slightly more grounded and slightly less lustily rendered on the screen than was Angelina Jolie.

Tomb Raider is fine, I guess, except for some painful green screen moments that are ENTIRELY unconvincing. And the fact that it’s boring as shit to watch someone solve a puzzle when the puzzle is never shown or known to us. It’s just a lot of knob twisting. Vikander is tough as balls but the story is uninspired and makes no arguments for its own existence. This franchise didn’t need a reboot and it got a rather lacklustre one, despite Vikander’s charm.