High school senior Marcus (Keean Johnson) isn’t trying to be rude but yes he is wearing two different sets of headphones because maybe he wants to listen to Radiohead and a gentle field breeze at the same time. He’s that guy, a total audiophile, most of his music taste inherited from his big brother who died saving him from a house fire. He’s teased about the burn marks on his back but Marcus is proud to wear such visible proof of love. He’s a little less enthusiastic about the toll these events have taken on his mother, who is the living, breathing embodiment of “overprotective.” He takes off his double head phones to hear some live music, but mom says he’s got to be home by 10, and he fully intends to comply. Except the opening act is transformative in many ways; Wendy (Madeline Brewer) is beautiful, her voice like gold to him, and when her set is finished, Marcus makes to follow her but gets elbowed in the head and falls to the floor in the throes of a seizure.

At the hospital they tell him he has brain tumors that need to be removed as soon as possible. Just one problem – well, aside from the obvious: this brain surgery is going to leave him deaf. With only a month to hear all there is to be heard, he embarks on a road trip toward New York City, completing a bucket list of all the best noises, and recording them all on his ultimate playlist of noise. Which noises would you choose? And more importantly, at least to a red-blooded teenage boy, who would you choose to accompany you on this quest? It’s a no-brainer for Marcus, particularly because she doesn’t exactly give him a choice. He and Wendy take off in his mom’s minivan without a plan or permission, determined to record everything worth hearing.

It sounds like a fairly typical young adult film, but Keean Johnson finds layers to his character, and I think most audiences who bother to will find layers to the film as well. Marcus’s trip is an attempt to find some peace with a looming loss, but he’s dealt with loss before, and perhaps he knows grieving, and coping, better than most. The script remembers to touch base with Marcus’ whole life – his friends, his family, the brother he never stops thinking about – but in his pursuit to hear all the sounds, he brings along a brand new person, the last new voice he will ever know. Of course there’s a certain melancholia to this act of goodbye, but the film is also a celebration of sound. Kudos to the guys in the sound department for their dedication to detail; even noise that doesn’t appear on Marcus’s list is paid special attention to.

The first half of The Ultimate Playlist of Noise played in a familiar way, much like that dying teen trope that movies like this just can’t stay away from – and yet this one has. Despite Marcus’s struggle to cope, losing his hearing isn’t a death sentence, it’s just the start to a new way of living, and yes, the end to the old way. But Marcus’s road trip isn’t just a recording session, it’s also a reminder that there are still plenty of beautiful things to see and think and feel, and that life will go on and be worth living and indeed be very good, hearing or no.

Mostly, we’re very lucky to travel the world, attend film festivals, and see great movies eons before any of you jerks. But, to be honest, there are a few downsides. Popcorn isn’t a food group. It’s hard to take notes in the dark. There’s only so many times you can sincerely shake Matt Damon’s hand and say “Pleased to meet you.” But worst of all: sometimes you see a really great, or really interesting, or really controversial film and all you want, in fact NEED, to do is talk about it with fellow film fanatics but you can’t because literally no one else has seen it yet. I remember seeing La La Land at TIFF, my eyes stinging as I went from my dark corner of the theatre to broad daylight, sobbing as I walked through downtown Toronto to my next film, and walking straight into Arrival. Back to back massive, amazing films that I needed to discuss and debrief – but with whom? And then I saw Jackie and Lion and Loving and The Lobster, 4 or 5 movies a day for 10 days, at the end of which, I’m punch drunk. And then I have to sit on all this movie madness for anywhere from 3 months (lots of Oscar contenders are aiming for Christmas releases) to 3+ years (if the festival fails to bring in offers for distribution). Thank goodness I drink; if my memory were any better, I’d probably be fucked.

Cam is one of those movies that I’m dying to talk about, and it proves that a press pass is a nice thing, but 17 press passes for my 17 friends would be much nicer. Of course, I 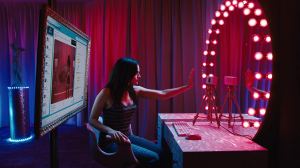 come home and stare at this white, white screen, trying to distill my thoughts, keep them straight, not confuse them with any of the other 32 trillion movies I’ve seen, and find a way to sort of talk about them with all of you. And that’s possibly the hardest part for me because I’m a bit of blabber mouth but a review is not about telling, it’s about hinting, hinting just enough so that you have an idea whether you should see it or skip it or read some other, more cohesive review that doesn’t waste 400 words complaining about having seen a terrific film.

I buried the lead there. Surprise: Cam is a terrific film!

I’m so glad I got that off my chest. I was playing it so cool during that first paragraph, trying to distract us both with all my reminiscing (I’m pretty sure those are my  memories anyway – of course, I wouldn’t swear to it. Not on my mother’s life. Not even on yours – no offense, of course, but I don’t even know the lady).

One day she finds herself locked out of her account, and stranger still, someone else is using it. Well, not someone else. It’s still her. It’s just not her her. Who is this impostor? How is this sneaky, thieving lookalike even possible?

Cam descends into this pulsating vortex where we must question everything. What is digital identity? At this point, is it even separate from our “offline” identity? How valuable is it? How do we prove it? How do we safeguard it?

Alice is a many-flavoured protagonist, and Madeline Brewer will FREAK YOU THE FUCK OUT. Damn she’s good in this, in a can’t-watch, must-watch kind of way. Fierce and fearless, she’ll turn you on, she’ll mess you up, she’ll  haunt your dreams.

Cam is a smart, timely movie about sex work, but it’s also this swirling, confounding, complicated piece of cinema that manages to look stylish and cool even as it challenges some pretty core notions. I like its subversive nature, how it pokes the bear in sly and cool ways, how it opened me up to an underground world I’ve never really seen before. I was “lucky” enough to be in the audience for its world premiere at Fantasia Film Festival, but I won’t be truly happy until you’ve all been infected with it also, so I can finally dissect it the meaty, enthusiastic way it deserves.