Put your money where your mouth is: seek out films with women in the director’s seat, and see them in theatres. Women In Film Los Angeles has asked people to take a pledge to see 52 films directed by women in 2017. We’ll be writing about some excellent choices in the back catalogue, but here are some that will be screening in your local cineplex.

Wonder Woman: You’ll have to wait until June for this one, but it’s the first superhero blockbuster to have a female director, and it’s also the first time a woman has been given a budget of over $100 million. Director Patty Jenkins is best known for directing Charlize Theron to her Oscar in Monster. This movie already has a terrific trailer and star Gal Gadot looks pretty badass as the warrior princess, so it’s in pretty good shape.

A United Kingdom: this one hits theatres next month so you’ll soon be able to get a taste of Amma Asante’s work, if you haven’t already (she directed Belle, which you should absolutely check out). A United Kingdom is the true story of  Prince Seretse Khama of Bechuanaland (now Botswana) and the white lady he chose to marry. You might guess that neither of their families are impressed, but it’s the South African apartheid government that poses the biggest problem. It stars David Oyelowo and Rosamund Pike and it debuted well at TIFF.

Lovesong: Also out in February, Lovesong is a road trip movie about two women, a single mother (Riley Keough) and a free spirit (Jena Malone) who see a new intensity to their relationship throughout their travels. Sundance has big praise for the Korean American director So Yong Kim and her intimate, nuanced portrait of strong female leads.

Raw: This one is for only the strongest stomachs among us. It debuted at TIFF to rumours of people fainting and\or vomiting over the graphic scenes, in which a young vegetarian is hazed at vet school by being forced to eat meat, awakening in her a real taste for flesh. Writer-director Julie Ducournau was praised for handling the coming of age stuff just as well as she presents the intensely disturbing stuff, and Ducournau’s just getting started: this is her first feature film, so watch out for her.

Their Finest: This is a romantic war comedy. Yes, you read that right. It sounds wrong but it actually is pretty fantastic. It stars Gemma Arterton, Sam Claflin, and the wonderful Bill Nighy as the people behind morale-boosting movies during the great war. It’s deliciously funny at times but director Lone Scherfig makes sure it’s more than just that, and everyone rises to the occasion.

The Zookeeper’s Wife: I read this book so I know the film will be intense. It’s the true story of the couple who ran the Warsaw Zoo during the second world war; they used the zoo as cover to hide Jews, and ended up saving hundreds of lives, but not without cost. New Zealand director Niki Caro doesn’t have as house-holdy a name as the star, Jessica Chastain, but other notable movies of hers include McFarland USA, North Country, and Whale Rider. Her name is on its way up.

Rock That Body: I’m not quite sure what to make of this one, but I’m putting it on the list anyway. It’s a female ensemble comedy in the style of The Hangover, only instead of losing a friend, they accidentally kill a male stripper. These things happen! Starring Scarlett Johansson, Kate McKinnon, Jillian Bell, Ilana Glazer, and Zoe Kravitz, and directed by funny lady Lucia Aniello. Fingers crossed that this one works! [Ed. note: this one was renamed Rough Night]

The Beguiled: If it sounds familiar, you’re right. It’s a remake of a 1971 film starring Clint Eastwood. This time around it’ll be Colin Farrel in the Eastwood role, a Union soldier being held prisoner in a Confederate girl’s boarding school. All the young ladies fall for him (including Elle Fanning, Kirsten Dunst, and Nicole Kidman), which means it’s not long until things get complicated. Really complicated. The (new) Beguiled will be directed by Sofia Coppola, who’s got some big titles under her belt like Lost in Translation and Marie Antoinette. I hope this one’s a hit!

Lady Bird: This movie is a semi-autobiographical coming of age story about a senior in high school (Saoirse Ronan) who’s getting ready to leave home. It co-stars Manchester By The Sea’s Lucas Hedges, plus Jordan Rodrigues, Laurie Metcalfe, and Tracy Letts’ but oddly enough, this first-time solo director is probably the most famous name of all: it’s Greta Gerwig. Good luck to her, and may it be the first of many.

Unicorn Store: We’re not sure when this one’s even coming out but it’s never too early for 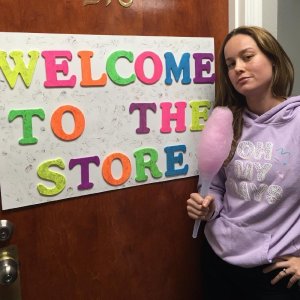 anticipation! It’s about a woman named Kit who moves back home to live with her parents and then gets an invitation that makes things interesting. Brie Larson will star AND direct, despite the fact that she’s got an absolutely packed 2017, what with Kong: Skull Island, Free Fire, Basmati Blues, and The Glass Castle all being released, but this quirky future Captain Marvel always has time to surprise us.