If Elliot hit on me the way he hit on Mia, he wouldn’t have gotten the time of day. Clearly Tinder has desensitized her – an unwanted intrusion and the implicit assumption that women somehow owe some kind of interaction to all men who ring the doorbell aren’t enough to dissuade her. She consents to a date, her roommates encouraging her to “get her dick wet” and he confesses: he was just diagnosed with cancer yesterday. It’s life threatening, and more importantly, sex threatening (ie, a tumor on his pubic bone, specifically Ewing’s sarcoma, if you’re the type who likes to Web MD that shit). With sex off the table, Elliot’s going to have to relearn how to talk to women!

So anyway, this puts kind of an awkward pressure on their relationship for a couple of kids in their early 20s who weren’t necessarily looking for anything serious. This pressure cooker means they get to know each other very intensely and soon they’re inseparable: chemo, radiation, surgery, and even a bucket list for broke 20somethings. The other people in his life get a little jealous that Mia’s monopolizing all his time, but they’re living like these might be his last days, because these might be his last days.

Jeremy Allen White and Mia Monroe are excellent as two people on this impossible trajectory. Either their love is doomed…or it’s doomed. Youth and passion may be enough to plow through the indignities of a medical crisis, but what happens outside those bounds? What will they even have to talk about if not tumors and ports and hair loss? Even if forever isn’t exactly a long time, it’s still further ahead than either of them has ever though. Cancer has launched them into a premature adulthood, which may be a flimsy premise for a love story. You think that illness is going to be the greatest test, but lots of mundane things topple relationships with deeper roots than theirs.

American Honey is one of those rare American movies that are so beautiful that even Shia LaBeouf couldn’t ruin it.

I’m not exaggerating. It really is that good. In fact, Shia’s in it. And he’s really good

American Honey works neither in spite of or because of his performance. Instead, he is just one of many important parts of an impressive cast of mostly non-actors with not a single weak link in the bunch. Jake (LaBeouf) leads a team of about a dozen runaway youths who earn their living by travelling across the United States selling magazine door-to-door. Their newest recruit Star (Sasha Lane) isn’t so sure that she is comfortable with the lies that her new colleagues use to sell their product but, having seemingly nowhere else to go and having quickly fallen for Jake, she starts to feel at home with them anyway. 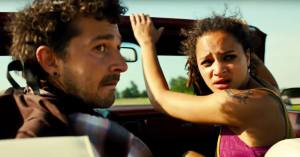 I struggle to communicate what it is that works so well about American Honey. My writer’s block was so bad that I went to see it a second time, quite a commitment with its 163-minute running time. All I’ve really learnt from two sittings is that writer-director Andre Arnold creates a believable world around these characters and makes it easy for the audience to feel like they’re a part of it. (Well, maybe I should just speak for myself. At my first screening, the film had lost over half its audience by the end).

To keep from getting too bored or discouraged while on the road, Jake’s team engage in 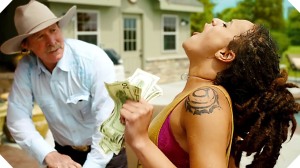 any number of traditions and rituals that are often somehow both unsettling and charming. Their favourite songs, games, and chants serve the film well in helping create a subculture that we can believe and relate to. Beautifully naturalistic performances from an exceptionally well-chosen cast, great choice of music, and some terrific (though sometimes elf-indulgent) cinematography help bring their world to life.

It’s hard to describe what works about American Honey because it works mostly on an emotional level. Intellectually, I’m not sure if it’s really “about” anything other than an unusually honest and surreal coming of age story but the power of the filmmaking gave me chills.