The bad news is that you have sit through pretty much the whole entire movie just to see it. And don’t be distracted by his ass. That was a fine tactic by the filmmakers and I respect it but we should rise above. You can see ass in almost any movie. You came here to see dick.

See that thigh? Keeeeeep going…almost there. Penis! Side peen, but peen just the same. 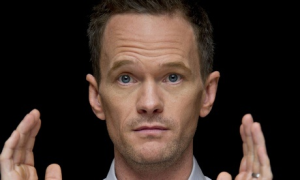 I believe this movie is 2-for-1 in that we also get a glimpse of Neil Patrick Harris’ cock as well, but that one comes at the exact moment that the whole theatre is recoiling in horror and looking away.

So. Big Ben. Thumbs up or thumbs down?

I didn’t like the book. It was too slick. You see it coming a mile away. It felt like an airport book done up in a fancy dust jacket so we’d mistake it as “lit”. It wasn’t. 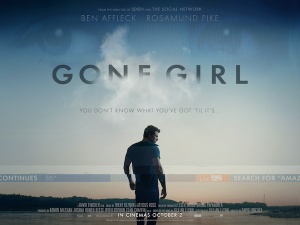 The movie? Trash. But exquisite,moody, sexy, noir trash that you can almost picture in a fast-talking, black and white, Hitchcockian way. Which is maybe what it should have been. Or maybe what it aspired to be.

It’s juicy and entertaining. The who-dunnit aspect is over surprisingly quickly, which is probably for the best since the book relied on the reader being really really dense and the movie gives us a bit more credit.

The movie succeeds with its portrayal of the media coverage of the disappearance of a beautiful blonde woman. Of course they’re going to jump allll down Ben Affleck’s throat, and of course Ben Affleck is a pretty good choice to play someone being hounded viciously by press (not to mention the brilliant casting of his chin!). The woman who does the Nancy Grace impression is spot-on. Rosamund Pike is also well-cast, and both she and Affleck handle their ever-evolving characters with subtety and competence. As an audience, we are constantly asked to re-assess what we feel about them as we learn more and like them less. Affleck excels at smug; Pike does chilling with panache. You can believe in the polarity of the characters, and that’s the hinge of the movie.

There’s a creepiness lurking about in this movie, even during the flashbacks to better times. They’re flirty, but they’re also just playing a game, and then that game gets serious, and then it gets out of control. Enter NPH, a slimy character if ever there was one. As much as I love me some NPH, I could have done with less of him in this movie, and more of Tyler Perry, playing a suave and yummy lawyer who takes the reins  and steers Affleck confidently into manipulating the media.

The questions in this movie will make you squirm (although, the sheer length of the movie may already have had you squirming anyway). Do we ever really know our spouses? Can we? And what is “true self” anyway – if we present ourselve very carefully and consistently one way, isn’t that what we mean by “identity?” And if nothing else, the movie’s ending will leave you in agony. Sweet, sweet agony.