A Christmas Star has some charms, I’ll admit to that.

It’s made entirely in Northern Ireland, a Cinemagic project for young people to get experience in the film industry, the amateurs working alongside industry experts, training up the future of Irish film, which is a cool idea and a bit of a Christmas present in and of itself.

The script borrows heavily for typical holiday fare, so you won’t find originality in between the stilted dialogue, but there is a lot of heart.

The children of a small town take on capitalism when the primary industry – the manufacture of snow globes – is being threatened. Led by Noelle, a little girl born on Christmas day who believes she can “do miracles,” the cast of kids is surprisingly adept. James Stockdale, who plays Noelle’s best friend, is a particular stand-out for me. As you know, I am always happy to see different 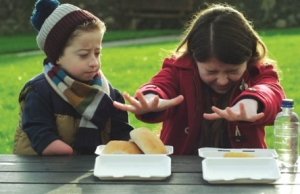 abilities on-screen, especially when the disability is not treated as a novelty. His character just happens to be different but is still 100% part of the group. He isn’t there to be “the disabled one” and Stockdale is a bona fide actor. Christmas miracle? You tell me.

Pierce Brosnan and Liam Neeson show up in small roles to add a little credibility to the ensembles, with sprinkles of star power from the likes of Kylie Minogue.

Cinemagic is an international film and television festival for young people and counts Neeson and Brosnan among its patrons. It’s clearly putting its money where its mouth is in putting on productions like this, and I’ll be glad to see more from them in the future.

A Christmas Star will be playing on television this week:

And I found it on Netflix!