If you’re wondering whether you should bring your 2-year-old to see this movie, the answer is a 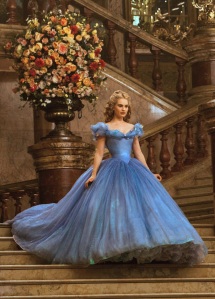 I happened to sit beside a 2-year-old girl at the screening of this movie a few nights ago, and it did not go well.

Could she make it 3 minutes without yelling something out? No.

Could she stay in her seat? Of course not.

Did she spill all her popcorn before the movie even started and then cry about it at an ear-aching volume? You’ve probably already guessed the answer.

But the thing is, she’s 2. I actually thought she was pretty well-behaved for a two-year old being asked to sit still for over two hours (the movie’s not that long, but the event sure was.) The problem is not the chatter and the squirming, the problem is that in Cinderella, both parents die.

Did you remember that little detail? That’s the catalyst for poor Cinderella being left to the whims of her evil stepmother. First the mother dies, and then the father. And the little girl beside me just didn’t

get it. Of course she didn’t get it. At two she’s just beginning to understand that people leave and come back but still exist when you’re not seeing them. Two-year-olds love to play hide and seek. They’ll search for hours (but they really suck at hiding). So even though her mother explained to her that Cinderella’s mommy died (but what is died?), the little girl every 4 minutes would ask “Where’s her mommy?” and every time a vaguely female character appeared on-screen “Is that her mommy?”. And then the dad died, off-screen, and the movie just could not be saved. At two, she is confident that parents always come back. She can’t understand that they just don’t exist anymore. But she’s starting to feel a little panicky about it. Cinderella is sad – why don’t they come out from hiding? A two-year old needs stability, needs to believe that her parents will not abandon her. She resisted the idea of the dead parents for the duration of the movie and had no appreciation for anything that came after. Every moment she was obsessed with the return of the missing parents.

There were other little girls (and boys) at the screening, and the older ones (say, 5 and up) seemed 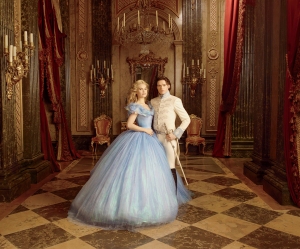 to tolerate it well. The live-action still has the mice, and the dress, and the glass slipper, and the fairy god mother all of the elements to dazzle a child. But it dazzled me as well. I was quite pleased that Kenneth Branagh did so faithful an adaptation – yes, mixing in just a tiny bit of Grimm stuff to even out the story, but giving us just a blush of nostalgia (the shot of Gus-Gus nibbling a kernel of corn comes to mind) to evoke our own childhood experience of the film while telling the story we all know and love.

Lily James is quite lovely in the role. She certainly does The Dress proud – takes what was probably a 15 pound dress and makes it look light as air. Cate Blanchett steals every scene she’s in, though. 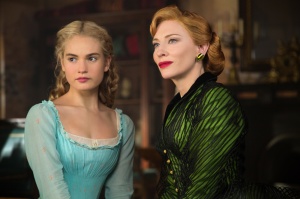 She’s still Cinderella-pretty herself, but she projects coldness like nobody’s business. She shows restraint, never fully abandoning herself into evil, always holding something back, a shred of humanity that leaves us feeling just a tiny bit sad for her. And she may not get to wear The Dress but she is quite well-dressed. Her gowns are sumptuous, the wardrobe department giving her lots of belted ensembles that remind us how much she means business. Even the set came properly dressed; I could practically feel the textures in Cinderella’s home.

Branagh is careful to sprinkle his fairy dust everywhere. The carriage is resplendent in gold. The glass slippers sparkle attractively. Prince Charming’s teeth are perfectly straight. Matt has said that

“If you can do Shakespeare, you can do anything” and I don’t doubt it’s true – I just didn’t expect Branagh to give us something so lovingly and painstakingly rendered. My only complaint is that the camera moves around way too much – so much that at times I felt sick. Cinderella is already plum-full of gilt and brocade and magic; it doesn’t need the added artifice from the camera. Just let it be.

Cinderella is rated PG, which means leave the two-year old at home (with a baby sitter, of course), but bring the rest of the brood to squeal in delight. Your kids will love it, and you might just find yourself right there with them.