Jordan over at Epileptic Moondancer wrote about this great film he saw, and he made me want to see it too, only, it never came. Well, not quite never, since it’s here now, only it’s just playing at our local art-house theatre (shout out, Bytowne, we love you!) and as far as I can tell, didn’t get much in the way of a release.

And that’s too bad because Mark Ruffalo, whom I normally loathe, does a bang-up job of portraying a husband and father who struggles with the mental illness that is now known as bi-polar (not so much in the 70s, when this film is set). His wife (a strong Zoe Saldana) married him optimistically and learns about his disease the hard way. In the throes of a manic phase he’s erratic at best, and scares his wife and two young daughters. They lose him to a psychiatric ward, and a

halfway house, and to loads of mood-altering medications, and in his quest to come back to them, he agrees to care for his girls while his wife goes off to NYC to get a business degree and a real shot at a job. She’s putting an awful lot of faith in a man who, most days, doesn’t seem capable of caring even for himself, but this is what he needs, and what their family needs, and needs must.

It’s easy to applaud this intimate and sympathetic look at a challenging illness. Writer-director Maya Forbes cast her own daughter in the fictionalized version of herself, a young girl caught between a father she dearly loves and a disease she doesn’t fully understand. This is clearly a deeply personal movie, stemming from a deeply personal place. And if this is how she experienced her father’s mental illness, then good for her. The movie makes it seem more like a quirky inconvenience than the devastating illness I know it to be, but if you ever have the misfortune of this diagnosis, then I fully hope that you get the bi-polar that Forbes lived with, and not the one I did.

Coming out of the theatre, Sean asked what I thought. And I genuinely thought it was a brilliant 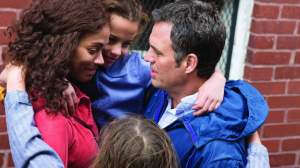 movie, so well-acted by all involved. I also think it makes bi-polar look kind of fun. And the thing is, like any mental illness, and like many illnesses period, I suppose, the symptoms and severity and experience will vary from person to person. So while some may enjoy riding bicycles in bathing suits as their low, when I lived with someone who was bi-polar, I spent long months in a sad, scary, violent, life-shattering space. It’s not always as fun as it looks in the movies.

But Mark Ruffalo does an excellent job of hitting both highs and lows with some subtlety, playing each note, finding the heartbreak. Saldana is vulnerable, and even though I never stopped asking myself how she could leave her kids alone with this man, I still felt warmth toward her for trying so hard to make bi-polar just another thing to live with. I’m still queasy about movies that romanticize mental illness, but I’m also blown away by some fantastic performances that thrive and come alive despite a saccharine script.