Don’t worry. Were you worried? Probably you weren’t even worried, but no, we didn’t go all the way to buttfuck Orlando, Florida and NOT go to Magic Kingdom. We went. Twice. Three times, really, if you count having dinner at Cinderella’s Castle, and there’s no reason in the world you shouldn’t.

Magic Kingdom is the first among the foursome, first among its peers, first in our hearts and minds when it comes to Disney World. Walt had this amazing vision for it, so he built it to be weirdly inaccessible, meaning the nearly 53 THOUSAND people visiting it DAILY have to bottleneck through one teeny tiny, wholly inadequate entrance that can only be reached via ferry or monorail.

Once you’re in, though, you’re golden. Main Street welcomes you with its sparkling stores, its roaming barbershop quartet known as the Dapper Dans, the balloon vendors 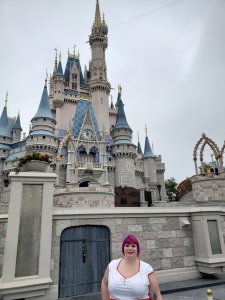 and the cotton candy vendors, the random characters milling about (we ran into Abby Mallard from Chicken Little fame, who grabbed my hand and skipped off with me toward the castle like we were the best of friends). Mickey and Minnie are known to hang out in Town Square. The Plaza ice cream parlour sells a sundae called the Kitchen Sink and it’s a LOT of ice cream sold literally in a kitchen sink. There’s a crystal palace where Winnie the Pooh and friends are known to brunch, and a nice green space where Mary Poppins strolls about underneath her parasol. And right in front of the castle is a large roundabout where all the parades do their thing, and man oh man are there parades. If you wanted to, you could park yourself in a shady central location and just be entertained by parades all day long. There’s the Festival of Fantasy parade,  a lovely thing where all your favourite princesses meander by on themed floats and the Move It! Shake It! Dance and Play It! parade where floats are parked for a good half hour and a high energy show is happening on each float, featuring standard characters like Goofy, but also some fresh ones, like Zootopia‘s Judy Hopps. And then there’s Mickey’s Royal Friendship Faire which happens 6 times a day right on the steps of the castle. Sir Mickey is joined by friends including Anna, Elsa, and Olaf in a musical spectacular. And those are just the ones we caught.

We rode: Haunted Mansion, which the kids declared “not that scary” with some relief; Pirates of the Caribbean where we got a little wet; Dumbo the Flying Elephant, which now has a component under the big top where kids can play in a little circus-themed 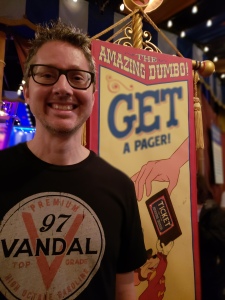 playground while you wait. We avoided the spitting camel in front of the The Magic Carpets of Aladdin. We climbed the Swiss Family Treehouse which was stupid given the enormity of my bad ankle. It hasn’t spoken to me since. Some of us did Barnstormer, a roller coaster friendly enough for even our anxious kiddos; everyone enjoyed The People Mover a couple of times, because it oddly became one of Brady’s favourite “rides” and I have no idea why but didn’t object because despite its surprisingly long line, it is a 16 minute sit that my throbbing ankle (I swear it had its own heart beat) was always grateful for. Buzz Lightyear’s Space Ranger Spin is a lot of good fun, even if my sister thought my steering was rubbish and took over half way through. Jungle Cruise, soon to be a Dwayne Johnson/Emily Blunt movie, is an absolute must, and a favourite of my brother-in-law, who has a special appreciation for corny dad jokes.

And on our last day, when my ankle was a special shade of purple that communicates ENOUGH rather effectively, Sean and I did a secondary tour of the park called sit and eat (and drink). We went to Gaston’s pub and drank Lefou’s Brew. We went to the Cheshire Cat Cafe and had a cat tail pastry and a Wonderland slush, complete with candy-coated straw. That’s where I also enjoyed my favourite ride at Disney World: a clean women’s washroom with no line!

We were lucky enough to snag a reservation at the Beauty and the Beast castle restaurant, Be Our Guest. We ate in “Belle’s favourite room”, code for the paying guest’s least favourite, but it was still pretty cool, the walls crowded with majestic oil paintings featuring recognizable moments from the film, and a life-size music box feature of Belle and her Beast waltzing around. The main dining room is of course the ball room, where you can see it snowing outside despite the actual blistering Florida sun, and the last dining room is the forbidden west wing, very dark and atmospheric, with the enchanted rose under a glass dome and a portrait of the prince that morphs into the beast every 7 minutes. The menu has suitably French fare on hand (though accessible enough for all palates, gauging by my sister and her family who are very plain eaters) but the best part 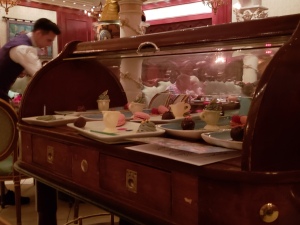 is dessert, which proudly features the grey stuff (there’s a line in the song – “Try the grey stuff, it’s delicious. Don’t believe us? Ask the dishes!”) No need, you can just ask me, and: yeah, it’s very good. It came in a white chocolate tea cup, betwixt a truffle and a macaron, on edible stained glass. The kids got a white chocolate tea cup too, but they got edible paints and set to work creating their masterpieces, which, honestly looked like trash to me, but they were proud enough to insist that photos be taken. Before we left, we got to meet the Beast, though he’d been by to take a bow during our meal (which is quite presumptuous of a host, if you think about it). This restaurant may seem unassuming but for me it was also the biggest thrill ride in the park, because at the end of the meal, when presented with a bill for $400, my card was declined. Or rather, the last $17 of it was declined. I shame-facedly handed over a $20 bill and made eyes at Sean that communicated basic human emotions such as ohmygodwhatdidido and howdidispendallthatmoney and canweevengethomenow? Your heart really seizes when you hear the words visa and declined in the same sentence, so I didn’t stop to think that never in the history of declined, overtaxed credit cards, does the machine ever spit out “well, she’s good for $383 but not that last $17.” That’s not how credit cards work. Luckily, between Sean and my sister, whose hearts were working normally, and the waitress, who was very bad at her job, it was determined that she hadn’t put through my card at all, and the $383 was from another table, and the whole thing was a huge misunderstanding which only shaved about 90 days off my lifespan, probably. Anyway, don’t you worry about that waitress; her 18% tip was worked into the bill already, no hard feelings allowed.

…think we should go back?