Read the title out loud and kind of quick, and it’s hardly distinguishable from “I love dogs” but the conflict in the film actually comes from not loving them enough. A city in Japan has a dog-hating mayor who selfishly spreads lies and rhetoric about the dog flu, and gets and\or manufactures enough support that he succeeds in banishing all dogs to Trash Island.

As most of you know (because my bursting heart can’t shut up about it), I’m lucky enough to share my life and home with four of the sweetest doggies in the world. I 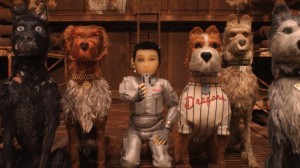 sometimes wonder if I prefer dogs to people, and I certainly do prefer my dogs to most people. I think dogs are so much better than we deserve. They are 100% heart. So it’s hard for me to imagine a bunch of dog owners so willing to sentence their dogs to a terrible, lonely, miserable life and death. Of the thousands (hundreds of thousands?) of dogs sent to live and die on Trash Island, only one is lucky enough to have an owner come looking for him – a 12 year old boy named Atari. When Atari becomes stranded on the island, a scruffy pack of dogs generously decides to help him find his beloved Spots. Duke (Jeff Goldblum), King (Bob Balaban), Rex (Ed Norton), Boss (Bill Murray), and even the reluctant Chief (Bryan Cranston) band together to reunite boy and dog on a journey that you  might just say belongs in a Wes Anderson movie.

And it is a Wes Anderson movie, horray! So of course it’s got some truly absorbing attention to detail, a sweet soundtrack, and a poignancy verging on nostalgia. Like Fantastic Mr. Fox, Isle of Dogs is beautifully rendered in stop-motion animation. Each dog puppet is a thing of beauty, with fur (made of alpaca hair, apparently) so pettable and little noses that you’re sure are moist to the touch. Their expressive eyes bore into you, and as Bob Balaban so eloquently put it during the Q&A following the film, it could have been a silent film and still been just as affecting.

As saturated as they are aesthetically, some may argue that Wes Anderson movies are ultimately style over substance. Isle of Dogs has some pretty obvious themes about mass hysteria and maybe even fake news, but for me the takeaway is simply to love better – dare I say, more like a dog, fully, and with devotion.