Joseph Gordon-Levitt (also appearing in 50/50) stars in the only bank heist movie screening at Healing Fest 2015.

Chris Pratt (JGL) was hot shit back in high school until some reckless driving leaves him with a traumatic brain injury. Since the accident, he can’t concentrate quite like he used to and needs 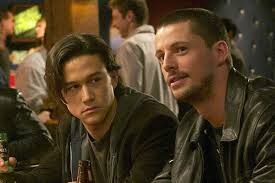 to make himself a list of instructions to even be able to do simple things like making himself a bowl of soup. After what seems at first to be a chance encounter with an old schoolmate, he soon finds himself in way over his head when he is manipulated into acting as accomplice in a bank robbery by a gang of low-lifes looking to take advantage of his disability.

The ski masks, shotguns, and double crosses only make up a small part of this indie thriller from writer-director Scott Frank. The Lookout tells the story of a young man who not only has to learn to live with a brain injury but with the consequences of his own actions. Two of his classmates didn’t survive the accident and Chris still can’t bring himself to visit his ex-girlfriend, the only other surivivor from the crash, who has lost one of her legs. 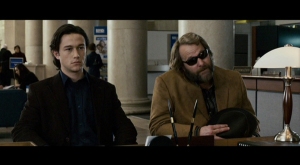 JGL apparently prepared for his role through sleep deprivation and strenuous physical exercise before filming to help give himself that confused and exhausted look. He’s made a career of playing likeable characters with more than their share of demons (Mysterious Skin, Brick, Looper) and his hard work pays off here. He keeps us invested in this story even as the plot twists start to seem implausible.

How do you go on living if you wake up one day unable to speak, unable to move, and only able to blink one eyelid? 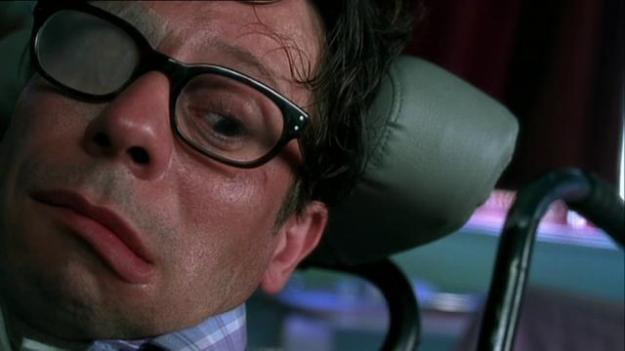 This is the seemingly impossible challenge faced by former real-life French Elle editor Jean-Domonique Bauby after, at the age of 43, he suffers a massive stroke. Bauby has team of talented and empathetic doctors, nurses, and speech therapists to guide him along the way but overcoming the understandable paralysis of self-pity will have to come from within. Learning to communicate again won’t be easy. Especially when, as you’ll soon see, communicating with his family wasn’t easy for him to being with.

Shot almost entirely through the one good eye of a paralyzed man, The Diving Bell and the 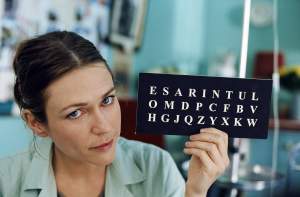 Butterfly could easily have been unwatchable. Instead, director Julain Schnabel offers us something life-affirming and almost excruciatingly beautiful. Schnabel’s lens takes us on a breathtaking journey through Bauby’s imagination while Bauby’s interior monologue, based on his own memoir, is painfully honest but often very funny.

The great Mathieu Amalric, who you may know from American films such as Quantum of Solace, Munich, and The Grand Budapest Hotel, gives an unforgettable performance, almost literally without moving a muscle. Also, watch out for the lovely Canadian actress Marie-Josée Croze as a speech therapist with unwavering faith and Max von Sydow as Bauby’s father. If you aren’t bothered by French subtitles- or a POV shot of one’s one eye being sewn shut, you just might be glad you gave this film a chance.

Man this movie looks gorgeous. And sounds gorgeous. What a soundtrack. It makes me wish this was a better movie. I think it’s a good one, but it coulda been a contender, you know? It really could have been something, and it came close. 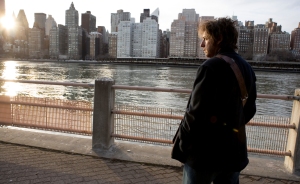 Charlie Fineman (Adam Sandler) is a puddle of grief and sadness. He lost his wife, his dog, and his three beautiful little girls in 9\11 and now he’s alone in the world and wants to keep it that way. He won’t let anyone in because that would mean remembering. He roves the streets of New York on his Segway and you know it’s the dead of night because the streets are empty and just in case they’re not, he’s encased in the safety of his headphones, draining out even the slightest chance of human contact. He’s a mess, but this opening scene is a tender meditation.

Then one day his old college roommate Alan (Don Cheadle) sees him on the street. Charlie is so locked into his PTSD he can’t even recognize a man he lived with for two years. The two rekindle an odd friendship, Charlie on shaky footing but believing Alan is safe to let in because he never 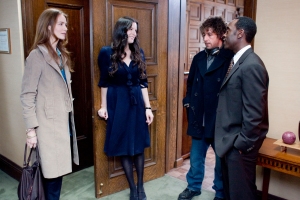 knew his family. But Charlie’s mental health is so deadened that Alan can’t ignore it, and seeks to find his friend the help he’s been staunchly refusing for years now.

Charlie is a portrait of grief that’s interesting and devastating to gaze upon. His house, once a family home, has degenerated into the saddest bachelor apartment you’ll ever see. His kitchen is in a constant state of renovation and demolition because that’s the last thing he and his wife fought about, and he can never quite bring himself to finish the project they started together. It is not lost on me that this is the third movie about grief and demolition that I’ve seen this month alone – Demolition, of course, and Life As a House, and now this. There must be something to it, this destruction of an old life, something cathartic. But it also made me think about those times when I leave the house mad. What if your last words were angry ones? 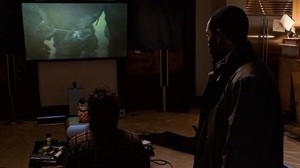 Sandler’s performance is moving but undisciplined, yet leaves absolutely no doubt that what we’re dealing with is a fucking broken heart. When he finally tells his story, it’s an effort, an ordeal not to look away. He sits in his dark apartment, playing video games, the imagery of which is not lost on the audience: a giant colossus is meant to topple in an attempt to bring a woman back to life.  It’s sad and futile, and no matter the good intentions, we all must grieve in our own goddamned time. 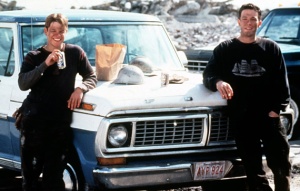 This movie is worth watching if just for Ben Affleck’s matching windbreaker and tear away pant outfits alone. He has the EXACT wardrobe of my Catholic school gym teacher\music teacher\ librarian, who accessorized hers with orange lipstick, a popped collar before they were cool, and faux-black curls that reached at LEAST three inches in height.

Matt & Ben, god love em. I love how these two high school drop-outs laboured to make the college classroom scenes authentic, but couldn’t be bothered to learn how to use a mop. I love Hollywood for that. Actors can learn to box and DJ and make a béarnaise sauce, but they can 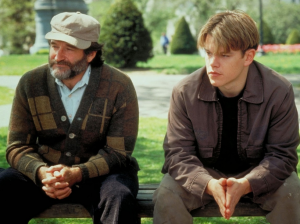 never convincingly fold laundry or pump gas. Why is that?

Anyway. The interesting thing about this movie is that it fools you with its quirkiness and quick wit into not seeing the incredibly predictable story arc. Sad, abused, troubled kid is actually a genius and he just needs someone to provide the Armour-Piercing Statement: “It’s not your fault” enough times to crack through his tough-guy veneer and get some healing on. Despite the basic cliché upon this film is predicated, the film succeeds in its smaller bubbles of truth. The defense mechanisms feel true. The relationships are charismatic. And blessed be, it avoids the gift-wrapped perfect ending. I like the ending of this movie so much, I’ve written about it before:

Like every other morning, Ben Affleck pulls up to Matt’s house with a product-placement cup of coffee, and jobs up the front stoop in his latest sport-douche look. This time, though, the last time, he knocks on the door, and no one answers. We already know that Ben has always secretly hoped for this very thing: he has said that his favourite part of the day is between his knock and Matt’s answering, that length of time where he can imagine that his brilliant friend has left his desultory life behind to chase the stars

. So we know that Ben is happy, but we also know that he will inevitably also be sad, having just lost his best friend, and having no such escape route himself. It’s a very bittersweet moment where not a single word is spoken, but so much is said. All of this is communicated with just a slight grin, but the script and the director have set this moment up so perfectly that it plays on the audience’s emotions for all it’s worth. Love it.