The Batman is another fresh start for a DC superhero. This time around, Robert Pattinson dons the mask, taking the torch from Ben Affleck, who was originally set to star in and direct this movie until he stepped aside in 2017 as director. Eventually, after Matt Reeves took over as director, after Pattinson got COVID-19 while filming, and after getting pushed from its original release date like every other movie in the past two years, The Batman finally arrived in theatres in March 2022 and started streaming on HBO Max and Crave this week.

Pattinson’s (The) Batman is in year two of his crime-fighting experiment, a relatively young man who is still learning his trade alongside Jeffrey Wright’s Lieutenant Gordon. Batman is brought in by Gordon to help investigate the murder of Gotham’s mayor by the Riddler (Paul Dano), and quickly figures out that the mayor is just the first name of many on the killer’s list. The list’s last name is an unknown informant, and Batman, as he does, tries to solve the puzzle of the informant’s identity so he can save the city and stop the Riddler’s plan.

To help in his quest, Batman recruits Selina Kyle (Zoe Kravitz), who gives him access to Gotham’s seedy underbelly, located in a nightclub run by the Penguin (an unrecognizable Colin Farrell) and regularly attended by mobster Carmine Falcone (John Turturro). Selina fights with and against Batman as the situation requires and proves herself to be both a worthy Catwoman and the best sidekick that any live-action Batman movie has had so far.

The Batman also features a great Batmobile which fits Gotham’s aesthetic about as well as anything that Batman’s ever driven, proving its worth in an excellent chase across Gotham’s freeways. Despite the movie’s almost three hour runtime, none of Batman’s other vehicles made the cut this time, which is almost certainly for the best. There is a clear inverse relationship between the quality of any given Batman movie and the number of vehicles Batman uses.

Given The Batman’s tortured history, I wondered whether it would have been better for Warner Bros. to have scrapped it along with so many other DCEU titles that never made it to theatres. But this film quickly won me over. Pattinson is great as Batman and also surprisingly good as emo Bruce Wayne, Kravitz is a compelling partner and love interest, and Reeves gives us a Gotham that is dark, rainy and gritty most of the time, but splashed with just enough colour and familiar elements to feel like it could be full of real people. It’s a place I would like to visit again, and there are enough villains left standing at the end of The Batman to support three or four more entries in this series before the next inevitable reboot.

Why is Julianne Moore even still making movies? I can think of few American actors with less to prove than Moore, fewer still who have turned in as many brave and egoless performances as she has over the last three decades.

Chilean director Sebastián Lelio (A Fantastic Woman) admires her too. In fact, he says that he chose to remake his 2013 film Gloria as his English-language debut specifically because he was such a big Julianne Moore fan that he wanted to see what she would do with the role. To anyone like me who has not seen the original, it would feel like the part of Gloria was written for her. Gloria is a 50-something divorced mother of two adult children (Michael Cera and Caren Pistorious). She has a full-time job and her kids do spend some time with her but it’s not enough to keep her from getting lonely.

Luckily, Gloria loves disco and loves to dance and she never cuts loose quite like she does when she’s alone on the dance floor on Singles Night. That’s where she meets the charmingly awkward Arnold (John Turtorro). The two quickly strike up a relationship even if Arnold’s co-dependent relationship with his ex-wife and adult daughters seem to hold him back from completely commiting to Gloria.

Thinking back, there is something very sad about Gloria Bell. But that’s only in retrospect. Lelio, like Gloria, chooses not to dwell on the sadness. Instead, his film spends so much time being laugh out loud funny that and is just optimistic enough that you can almost mistake it for a mindless crowd pleaser. It’s only three or four movies later when I realized that this was the one that I was still thinking about that I realized what a fully realized character they’ve created (or recreated) together. It doesn’t hurt that those in her life, the supporting cast, all seem to have real lives of their own when they’re not onscreen and could easily have starred in films of their own. I for one would have loved to know a lot more about Arnold. But really this is Gloria’s story and Lelio and Moore do her proud in a really impressive and effective film.

This movie is deliciously familiar.

It’s really fun to watch Quinn and Slate together on screen. It’s obvious the sisters have some history but ultimately they care about each other, and about their parents, who are seeming more and more human all the time. Do you remember the first time you saw your parents as fallible, flawed people? This is their discover. Their father (John

Turturro) may be stepping out on their mom, but he’s also the geeky guy who still takes them to Benihana for special occasions even though they’re far too old. Their mother (Edie Falco) has never struck them as a sexual being before, but it turns out that she too has wants and needs, and that maybe not all her tears and concerns are for them. This is a really great script that unfolds over just a couple of days, but pivotal days that will completely reconstruct the family.

Director Gillian Robespierre clearly has some love for the 90s and at times coasts on those references, which are admittedly a bit indulgent, but fun to savour. Landline doesn’t exactly break new ground in terms of theme or content but it’s a commentary on cheating by cheaters, and the implosion of a nuclear family just as it was about to expire anyway. There’s some nostalgia here, not just for the time period, but for that period of time before the kids grow wiser than the parents. The family’s shifting dynamics exhibit growing pains that are universal. And the great work by a talented ensemble means this family is fun to watch even as their ship is going down.

Did you know that O Brother Where Art Thou? is an homage to/rip off of Homer’s Odyssey?  Probably.  Did you know that neither of the Coen brothers read the Odyssey before writing this movie?  Probably not.  Having not read the Odyssey myself, I can’t say how accurate the movie is, but when the songs are so toe-tappingly great (in a depression-era sort of way), any lingering concerns about literary accuracy quickly fade.

If you read our site even a little bit, you probably know we are big fans of the Coens.  O Brother is the third Coen brothers film I ever saw (Barton Fink was the first, thoroughly confusing a

nd terrifying me at age 14, and Fargo was the second, and at age 20 I was not quite ready to embrace the weird mix of funny accents and wood-chipper gore).  I remember finding O Brother much less creepy than Barton Fink and much easier to digest than Fargo (while also noticing that funny accents were featured in all three).  In fact, I would give this movie most of the credit for making me track down other Coen brothers movies instead of writing them off as more of the same from the guys who were responsible for John Goodman and Peter Stormare stalking me in my nightmares.  So thanks, O Brother, for being my gateway drug to The Big Lebowski, No Country for Old Men, Inside Llewyn Davis, Hail Caesar, and so many more!

Basically, if you haven’t seen O Brother, you should.  It’s not necessarily a classic, and for my money it’s lingering somewhere in the 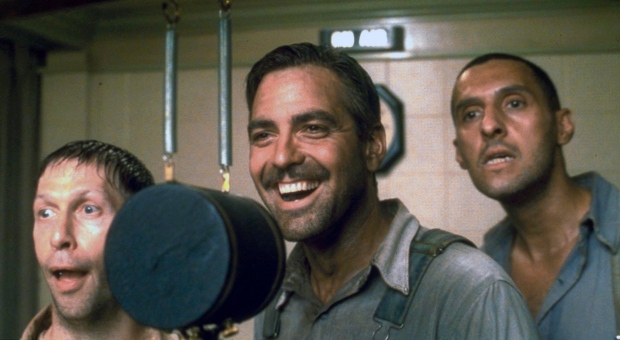 middle of the pack for the Coens, but it’s a great appetizer for their other stuff.  It’s also a fun standalone movie that has a fantastic soundtrack and a bunch of crazy characters doing strange things.  And if you have seen it, why not see it again, if only to notice for the first time (like I just did) that frequent Coen collaborator John Turturro is one of O Brother’s main characters.  Either way, you can’t lose!

O Brother gets a score of eight soggy bottoms out of ten.

John Turturro writes and directs this movie, and stars in it alongside Woody Allen doing a terrific Woody Allen impression.

Both men are past their prime and underemployed, so when Woody’s doctor mentions that she and her girlfriend are thinking about having a “menage” (a trois!) he volunteers his good pal Johnny Turturo, who’s “good with the ladies” and “sexy” and “looks good naked.”

All of these things are new and surprising and difficult to comprehend for an audience more used to thinking of John Turturro as he actually is. Good thing for director’s conceit.

It was hard to digest this movie for many reasons, but above all: why on earth would a hot lesbian couple made up of Sharon Stone and Sofia Vergara need to pay for sex? And if they were so inclined to do so, why are they paying for John Turturro and not Channing Tatum? The only way John Turturro starts to seem like a good option is when you stand him next to say…Woody Allen. Oh. I see what happened here. Suddenly the casting all makes sense. Johnny looks good in a comparative\relative way, and he gets to make out with a lingerie-clad wet dream and call it a living. The only thing more mystifying than this dynamic is the one between Turturro and a Jewish widow who is so orthodox that she cannot shake his hand and yet somehow has sought out the services of a neurotic gigolo and his spastic ho.

I see now that it was a morbid curiosity that made me watch this movie and I tell you with confidence that the world could have done without it. This gigolo didn’t fade fast enough.