Tony Lip was a tough guy bouncer at the Copa, Copacabannnna, the hottest spot north of Havana. But in the fall of 1962, the Copacabana closed for renovations, and Tony Lip was temporarily out of work with a wife and two kids to feed at home. Some wise guys seem to imply they might have some “work” for him, but he avoids that by taking work with Dr. Don Shirley, a world-class piano player embarking on a tour of the Southern United States. Tony isn’t thrilled that Dr. Shirley is a black man – he’s not too fond of them generally, but the money is too good to turn down, even if it takes him away from his family in the two months before Christmas.

Tony (Viggo Mortensen) and Dr. Shirley (Mahershala Ali) are an odd couple on a road trip. Tony’s crude and crass and unrefined; he’s rarely left the neighbourhood where he grew up. Dr. Shirley is a gentleman in every respect. He’s cultured and educated. His

manners are as impeccable as his dress. But when Tony boasts that he’s “blacker” than Shirley, who doesn’t know Aretha Franklin or fried chicken, he’s only showing what a narrow understanding of race he has, because when Shirley is repeatedly subjected to racist indignities and abuses, Tony is shocked while Shirley is not. The “Green Book” to which the title refers is an actual motorist’s handbook, which, for $1.25 teaches people how to navigate segregation and not get lynched while traveling down south. I feel that I might have sold a Red Book for $1.50 that simply said: don’t go. But Dr. Shirley’s going on purpose, knowing it will be hard, but feeling a responsibility to do his part in challenging the system. And white people play their part, paying to enjoy\appropriate his culture while refusing to dine with him in the same room.

It’s a tough subject matter that director Peter Farrelly makes palatable with humour and a gentle approach. Mostly, though, he relies on the magnificent chemistry between Mortensen and Ali, who are both wonderful. Ali has the bearing to makes Shirley’s multiple doctorates feel plausible, and the physicality to make his piano-playing feel real (it’s not, but it’s the best we’ve seen on screen thanks to Kris Bowers, his incredibly talented double). Together, Ali and Mortensen are magic, their scenes positively crackling. And when Dr. Shirley plays, there’s so much energy, the music wells up inside you.

It’s inspiring to see a time of social change reflected in one relationship, how we really can make a difference on an individual level. It’s unsettling to watch the worst racism unfold and understand that 2018 is not exactly beyond this stuff – in fact, we may need this reminder now more than ever. However, there are some problems that I have with the movie. Namely, that the story is Tony’s to tell. That he’s a hero because he consented to drive a black man, while the black man who has a litany of actual accomplishments is quite literally relegated to the back seat, a supporting character in what should have been his film.  Why are we still telling black stories through white eyes? Why is racism only safe to talk about when it’s a white experience? Why do I know how Tony launders his underwear but know so little about Dr. Shirley, a highly educated genius musician who has traveled the world but whose only meaningful relationships come from hired help? Dr. Shirley learned to play piano from his mother, whom we know nothing about. His only living relative is an estranged brother, whom we know nothing about. Dr. Shirley had to be above reproach at all times, constantly turning the other cheek even after he’d run out of cheeks; he had to be perfect just to exist in white spaces, just to be invited into them, briefly, under strict, inhumane conditions, on white people’s terms, and then to leave again as soon as they stopped having use for him, and to smile and pretend to be grateful about the whole thing. This is a white person’s black movie, the kind of movie white people can feel superior watching because they manage to be less racist than Alabamans in 1962. Pat ourselves on the back! Meanwhile, this is the white guy’s story, written by a white guy, directed by another white guy, with Oscar buzz somehow reserved for the white actor who dropped the n-word at a screening for the film. This is the kind of Best Picture nod meant to appease diversity problems, but it’s more about white comfort than black experience. Movies like Sorry To Bother You, Blindspotting, Blackkklansman, and even Black Panther, are better movies with more to say, and they’re told with black voices, which is why they’re more easily overlooked. But fuck white comfort. This shit should make us uncomfortable. If you’re talking about racism and worried about hurting white people’s feelings, you’re doing it wrong, and it’s time to stop.

Captain Fantastic, the movie and the man, asks big questions, gives brutal answers, and leaves you with deep thoughts for analysis.

Captain Fantastic, played with vigour by Viggo Mortensen, is a man raising 6 kids in the woods like a pack of wild coyotes. They’re off the grid. They hunt 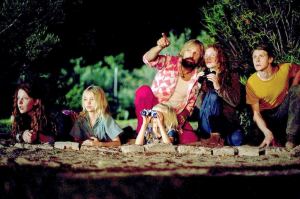 and grow food, read meaty novels by campfire light, and train their bodies strenuously, sometimes dangerously. Each kid has a unique, made-up name so they’ll be the “one and only” in the world. It sounds heavenly or lonely, depending on your perspective. Not all the kids are happy. Not all the parents are happy either, although so far I’ve only mentioned Captain Dad. Mom, as it turns out, is off in a mental health facility, and has been away from the family for several months before they learn she’s committed suicide.

Her death is the catalyst for the family returning to civilization to attend her funeral.

Viggo Mortensen is fantastic, although not always likeable. I’ve seen enough documentaries to know that raising a family off-grid, though idealistic, is not always so great for the kids. In Surf Wise, a doctor raises his kids on the beach, establishing a surf school. He turns out some great athletes, but the kids are otherwise totally unprepared for real life. Without education or even identification, it’s tough for them to rejoin the ‘real world.’ In The Wolfpack, a bunch of kids are kept pent up in a New York apartment. They develop rich inner lives and lots of art, but are totally unaware of what real life entails. In Captain Fantastic, the kids are book-smart but lacking in experience. They don’t know how to interact with the modern world, so unless all of them are prepared to continue subsistence living, and form an incestuous colony, it’s not really a sustainable lifestyle. And the kids are growing resentful.

Captain Fantastic raises a lot of interesting questions about parenting. Should a parent’s decisions always be respected? Are anti-capitalist, anti-

establishment values best addressed by dropping out of society? How much freedom is too much freedom for children? And what kind of risk is acceptable? And do children need to sometimes be shielded from difficult or painful concepts, or is complete honesty always the best policy?

This film is quite funny in parts, and quite serious in others. And by serious I mean I cried a small ocean’s worth of salty tears. The kid actors are mercifully good, and Mortensen is generous with them in their shared scenes. Writer-director Matt Ross delivers some pretty satisfying emotional release, and a captivating twinning of joy and sorrow. Unfortunately the script dips a bit in its final acts, letting Captain Fantastic off a little easily, but it’s already a philosophical triumph by that point, a good movie that’s actually about something.