Earlier this week, Matt and I went to the Bytowne, a historic old cinema with a vintage red velvet curtain, conveniently located in downtown Ottawa, to see Mr. Turner. At 3:30 in the afternoon, we sat among a sea of gray hair, the audience makeup largely retirement-aged, discount-wielding seniors here to see “the show”. What show? The early bird show, that’s what! No matter which specific film is showing, it’s all the same if a) you’re going to talk loudly throughout the whole thing, as old people so often do, and the ones directly behind us certainly did with vigour if not with understanding, or b) you’re going to sleep throughout the whole thing, as the old man sitting beside Matt did, his light snores drowned out by the shouting behind us, and his 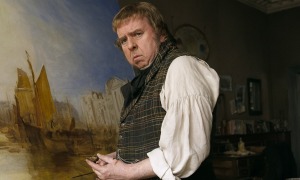 sleeping body obscuring our access to the aisle when we’d finally won our freedom.

Mr. Turner is a biopic about the famous painter J.M.W. Turner, a man far more complex than I ever would have guessed. I’m finding it hard to review a film that I simultaneously felt was very, very good, but also a yawn, so instead I’m passing the buck and forcing Matt into an interview of sorts.

Jay: Mike Leigh is known to be scrupulous in his research and has recreated the last quarter-century of Turner’s life quite faithfully. What this means is this movie is relatively free of conventional “plot.” How did you deal with this as a viewer, and do you believe it was an asset or a detractor to the film?

Matt: I think Leigh’s attention to detail was both Mr. Turner’s strength and its weakness. It made for a production design that was almost above reproach and that was almost always interesting to look at. 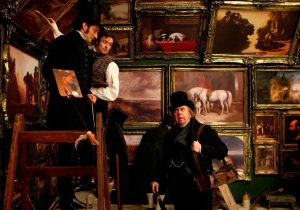 His commitment to historical accuracy was admirable and to his credit, I never felt talked down to as I often do when I got to the movies. Quite the opposite. I think he might have given me too much credit. The danger is a movie can sometimes get so bogged down in these details that it can alienate the viewer and Mr. Turner alienated me. Mr. Turner didn’t just take its time, it was slow and all the facts seemed to get in the way of telling a story.

Jay: Yeah, I thought some of the asides, like the little rant about slavery, kind of took you out of the movie, and definitely added length but not illumination. Other scenes, like when a young Queen Victoria visits the Academy and he overhears her spurn his work, are so much more vital. We see Turner stung by the Queen’s rejection of his work and then lampooned by music hall comedians for his move toward abstraction. He wants to please the public and yet isn’t prepared to compromise his vision to do so. Do you think director Mike Leigh sees himself in this character?

Matt: I don’t know much about Leigh except that I’ve sat through several of his films. Sometimes it’s a pleasure, sometimes it’s a chore. Even my favourite of his films unfold way too slowly for mainstream North American audiences. He seems to tell the stories he wants to tell without compromising his vision and isn’t afraid to alienate viewers with shorter attention spans. So, in tha way, I can see how he would identify with Mr. Turner and that would explain why everything about this movie feels like it 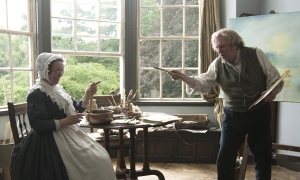 was the one that he has been waiting his entire career to make.

Jay: I think it was in the works for years and years, actually. That being said, I imagine that to pour so much of yourself into a movie, you’d want as many butts in the seats as possible. Movie directors aren’t normally known for making art for art’s sake. He works with a lot of his long-time collaborators, like Dick Pope (or Poop, according to the Oscars), his amazing cinematographer, and this time he also cast his own romantic partner as Turner’s romantic partner, Mrs. Booth. Turner not only neglects his family, but outright denies them to most others who ask. Why do you think that was and why did his attitude toward family seemingly change once he met Mrs Booth?

Matt: Well, this movie threw a lot of information at me so I’m not sure but I interpreted that as shame and embarrassment over having neglected his family. I thought it was easier for him to start over with a new family than repair the damage that he did to his first one. 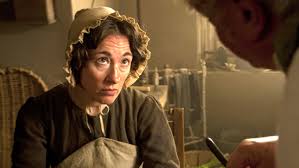 Jay: I felt like he genuinely just didn’t care. Like the art was the only thing that mattered to him. He didn’t have time or interest in relationships, except for his father, whom he cherished yet seemed to treat as a servant. There were so many seemingly contradictory aspects of the character that I can’t believe Spall pulled it off, and with grunts half the time rather than words! Timothy Spall has received many accolades for his portrayal of Mr. Turner, including best actor from the London Film Critics, the New York Film Critics, and the Cannes Film Festival. Usually known as more of a character actor, how do you feel about his failure to earn an Oscar nomination?

Matt: Well, I wouldn’t call it a failure because it was one of the best performances I’ve seen all year. He’s an actor I’ve always admired and Leigh is the only director I can think of who would have the balls to cast Spall as a lead. I think the Academy snub is mostly due to 2014 just being a particularly competitive year when it comes to male lead performances with David Oyelowo already being one of the most controversial Oscar snubs in recent memory. I think the main difference between the Oscars and the awards that Spall has already won is that the Oscars are a huge television event and they have to walk that fine line between being “prestigious” but also putting on a good show. So they want Bradley Cooper and Benedict Cumberbatch to show up. I think the Oscars try to find a balance between the tastes of critics and the tastes of audiences and I think Spall’s snub mostly boils down to Mr. Turner’s failure – or lack of effort – to connect with the general public. 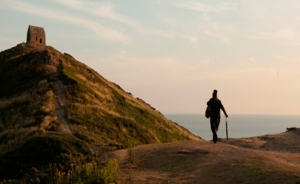 Jay: Agreed. It WAS a great year to be a man in the movies, but then again, isn’t it always? I mean, it’s great to be a male artist period, as evidenced by Turner himself. He lived the life he wanted while abusing the various women in his life. I like how Leigh presented this to us without judgement. Here is a man, who is both great, and deeply flawed. And I loved how the whole movie took on a glow, like it was a painting come to life. Actually, many of the many scenes n Mr. Turner open in long shot, with this huge, gorgeous landscape and Turner barely visible down in the corner, just a solitary outline of a figure. It kind of reminded me of the “hidden” elephant in one of his canvasses. Tip of the hat to all the film makers who made that feeling possible.