So if you’ve made it this far, you know that I’ve thanked some volunteers, watched 3 movies from female directors, and carried around a dead phone. Impressive, if I may say so myself, but it’s not enough to get TIFF Bingo.

Make a New Friend in Line

With hours spent sitting in uncomfortable theater seats punctuated by hours spent standing in line, the people you stand with and sit next to can really make or break your TIFF experience. A good conversation can make the two hours spent waiting for the perfect seat just fly by. Just as an annoying person can make the minutes drag on like hours. And if you’re thinking “Wait a second, I wonder if he’s talking about me. I am a total jackass after all and I did spend all of Euphoria with my elbow in his personal space,”, yes. I’m talking about you.

Downsizing– If Downsizing isn’t my favourite movie at the festival this year, it’s definitely close. I couldn’t wait for the latest from Alexander Payne, a filmmaker whose nearly every imdb credit (Election, Sideways, The Descendants, Nebraska, and even Downsizing) has been praised by one of us at one point or another. Fans of his work may be surprised by the science fiction elements of his latest film but Payne, who introduced the film, sees this as a disappointing rehashing of the same themes. “Just a poor {‘schmuck’ I think was the word he used’] from Omaha middling his way through life trying to make some sense of it all. Just this time with some science fiction thrown in,” he joked.

Downsizing has lots of subtext to ponder and debate but it’s hard to take it all in on your first viewing because it’s all way too much fun to watch. This may be Payne’s most entertaining and laugh-out-loud funniest film so far and I’m quite sure that I’ve missed some of the best jokes because they were drowned out by the Elgin Theater crowds’ laughter.

The new friends I made while waiting to see Downsizing took TIFF just as seriously as I did. Like me, their rough drafts of their schedule looks like the wall of an insane person trying to solve a murder. The thing is, once the line starts moving, you lose each other in the crowd . So if you’re reading this and you bought seven 10-packs to share with all your friends and you think you may have stood in line with me, leave a comment. I’d love to hear what you thought of the movie. And I hope that Karen has finally paid you back.

The Current War– Saoirse Ronan wasn’t in The Current War but I did talk about her in line to see it. “Who’s in Lady Bird again? Is it Saoirse Ronan or Elle Fanning?” I asked the nice couple in line ahead of me. I pronounced Saoirse correctly. Everyone seemed really impressed. What’s ironic, I realize now, is that I got her last name wrong. I always say “Rowan”. But TIFF Bingo said nothing about “Ronan” so it still counts.

I wish I’d seen Lady Bird instead of The Current War. It’s not like The Current War is a bad movie, it’s just more forgettable than it should be. The second feature from Alfonzo Gomez-Rejon (Me and Earl and the Dying Girl) dramatizes the rivalry between Thomas Edison (Benedict Cumberbatch) and George Westinghouse (Michael Shannon) as they race to heat and light the entire country with electricity. So it’s got potential. Cumberbatch and Shannon are pretty much the Pacino and DeNiro of leading men born in the mid-70s who specialize in playing eccentrics so the thought of seeing them go head to head put this at the top of my list. I passed on Suburbicon for The Current War!

There is some really good writing in this script but for every scene that captivates there are two more that look and sound like they were filmed for a Made for the Edison Museum movie. Both actors are good but are usually even better and they share disappointingly little screen time.

There’s a good movie in here somewhere. The Current War’s best scenes concern the lead-up to the first execution by electric chair and, for a movie that suffers from lack of focus, this subplot may have worked even better as the main plot. 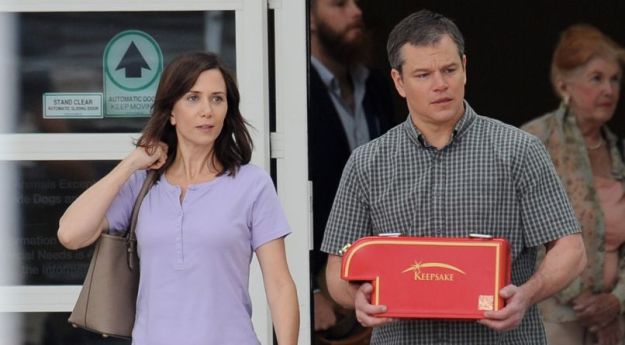 The world is overpopulated and in the very near future it will become untenably crowded: fact. We don’t have enough space to comfortably house all these people, we don’t have the ecosystem to support them, or enough resources to fund the lifestyles to which we have become accustomed. The rate at which these 7 + billion people consume means we are making waste and pollution like there’s no tomorrow – and if we continue doing so, there won’t be.

Luckily for fictional Matt Damon, a Norwegian scientist will come up with a revolutionary bit of science that’s going to sound nutty at first, but hear me out. He calls it downsizing. A medical procedure will taking a willing human being and shrink him down, to about 5 inches. These small people will live in small towns – dollhouses, practically, taking up little space, generating little waste. A typical person might liquidate all his assets, pay off all his debts, and find that the $150 000 he’s left with is equivalent to about $12 million in the small world. Live like a millionaire by becoming a fraction of your former self!

Occupational therapist Paul (Matt Damon) and his wife Audrey (Kristen Wiig) are the kind of people to whom this kind of deal appeals. They work but never seem to get ahead. Sure this downsizing is billed as a way to save the earth, but it’s also a way to personally wipe the slate clean, and live the life you could only dream of as a normally-sized person.

As you can imagine, being only 5 inches tall comes with perks, but also some drawbacks. As writer-director Alexander Payne imagines it, there are social and economic impacts to all these people retiring from “normal” society. Illegal immigration and terrorism are facilitated. Downsizing can be used as punishment, against someone’s will. And even if you’re one of those people living in luxury, you’re suddenly vulnerable to insects, birds, even high winds.

Downsizing is a well-timed satire, science-fiction that manages not to feel too fictiony. Credit Payne’s wit for packing as much detail as he does, and if sci-fi feels a little outside the wheelhouse of the guy who did Sideways and Nebraska, he actually manages it with a lot of humour and humanity. Though the film is at times unabashedly absurdist, it stays away from easy sight gags. This is a thinking film that abounds with ideas – you’ll need to digest afterward. It’s an indictment of the American dream, people so disenfranchised that they’re willing to undergo a risky procedure just to find fulfillment. But miniaturization isn’t really the answer it’s cracked up to be, with people’s problems seeming shrinking down to follow them.

Matt Damon is perfectly cast as a nice guy who’s just a bit of a loser. But for Sean, it was Christoph Waltz as his playboy neighbour who really stole the show. He plays a Serbian sleazeball who figures that what the small community needs is a small black market, and he’s there to profit. I, on the other hand, was blown away by Hong Chau as his cleaner, Gong Jiang, a one-legged Vietnamese dissident who shows Paul there’s more to life than just keeping up with the Jason Sudeikises (he’s the classmate at his high school reunion who inspired Paul to go for the Big Shrink). When Oscar season starts heating up, I hope her name is mentioned.

Downsizing is a unique film with a lot of style. Despite being the opening night film here at the Venice Film Festival, it likely won’t be a best-picture contender for me, but it’s a film full of ideas that I found immensely enjoyable.